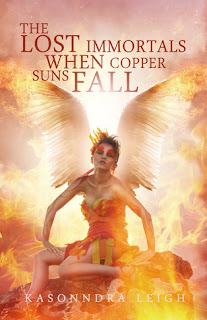 Summary: It has been fifty-five years since the angels of the Apocalyptic War attempted to wipe out humanity. Now a new nation has been built where alchemy is forbidden, and angels fear for their lives as they hide among the mortals.

The city’s leaders share one view on the ancestors of angels: shoot first, no questions.

When her twin brother falls into a strange coma, sixteen-year-old Chela Prizeon vows to discover her role among these exiles, the royal angels known as the Lost Immortals.

Chela’s only hope lies with the mysterious, but infuriating leader of a rebel group. But can she trust this boy, someone who can control her dreams and her heart?

When Copper Suns Fall takes place in a world that was destroyed when two groups of angels waged war against each other. 55 years after the Tidal Years, in the year 2067, humans have rebuilt, but the angel-bloods, descendants of the angels, have to hide who they are, because any angel-blood and those associated with them are immediately executed.

Although believed to have been extinct since the end of the war, the Caduceans and the Tainteds still war against each other, and one sixteen-year-old girl, Chela Prizeon, is caught in the middle. What is her role in this battle? And will she be able to realize her true power and strength to save those she loves?

This dystopian tale isn't like the rest I've read. I'm used to zombies, demons, and vampires causing the mayhem, not angels. So I really liked this new take on the end of the world as we know it.

Chela reminded me a lot of Dawn in the Darkness Before Dawn series. She's really quite mature for a sixteen-year-old. I loved how even when something completely terrified her, she faced it head on. Chela has a pretty huge responsibility she needs to shoulder as the Epiclesium, a descendant of the First Order of Seraphim. I also loved how determined Chela was to helping her twin brother, Micah. Her love and devotion are admirable.

This world and Chela's life is built on a mountain of secrets. All of the secrets floating around and half-truths really annoy Chela to no end. She doesn't know who she can really trust. These secrets and revelations are what keep readers on their toes. There will be something hinted at earlier in the book and then the revelation, whether true or not, jumps out at you unexpectedly. These secrets were one of my favorite things about this book. I was kept intrigued and wanting more.

There is quite a bit that happens in When Copper Suns Fall and it would be impossible to talk about them all without giving something away, but one thing I can't leave out is the love triangle. Or maybe I should call it the love/hate triangle. And of course Chela is caught in the middle of this too. Guy #1 is Faris, a Caducean demon slayer and Chela's Protector. Guy #2 is Seth, a Tainted masquerading as a Thoughtmaster. Now this is where the love/hate part comes in. I'm not sure I can say that Seth loves Chela, what they have is a little unclear. But Chela definitely loves Faris and he seems so be returning the love, although he hesitates. I'd definitely pick Faris over Seth, but there is something about Seth that is very intriguing. It'll be interesting to see where this triangle ends up.

With everything that happened in When Copper Suns Fall, all the secrets revealed and the ones still in the shadows, I'm really excited to see what happens next. She holds the MFA in creative writing, and loves to play CLUE, Monopoly (the Indiana Jones version), and Pandora's Box (good writer's block therapy). She lives in an L-shaped house with a garden dedicated to her grandmother. It has a secret library complete with fairies, Venetian plastered walls, and a desk made out of clear blue glass.

First I want to say a big thanks to my bloggerly host for having such a cool blog and inviting me here today. What you’re doing for indie authors is a great thing. We heart you forever. Big Smile.  Today I want to talk about the journey of the indie author. Mine is kind of just beginning; but I’m still happy to share a few things I’ve learned along the way. Mind you the presentation of these tips is just the result of my experience. It’s not meant to be an actual recipe for success as an independent author. What is working for me, may not necessarily work for the next person and vice versa.

That’s one of the most frequent questions I’m asked. It’s also one of the hardest things to summarize in a concrete answer. For an indie author working with a small press, I'd say my sales have been respectable. No, I’m not at the Amanda Hocking or John Locke level, just yet. But I do have a group of fans & readers that are loyal and encouraging. After all, it’s our readers that make us who we are. Oh yeah! And the bloggers. Never forget to mention the bloggers and all of the hard work they do. I’m a part-time blogger so I know how it goes.

In the journey’s early stages, you can measure your road to success on several factors. Or at least, these are some of the indicators I’ve found that many of my indie author friends use to measure the effectiveness of their branding.

1) Traffic increase to your author website:  In the beginning, when I first published kasonndraleigh.com (1/2009), I used to pray for one hit per week. Don’t be laughing at me, now. I’d check every day to see if anyone had visited. My twitter account was the same scenario. I think like four followers would trickle in one week at a time. Today, I get almost 8000 hits/month and counting. My twitter popularity rank is at #300,000 versus #30million like the way it was two years ago.

2) Number & quality of members joining your platform:  Platform differs according to your genre and classification. Non-fiction writers tend to be more inclined to measure that success on public image. But fiction writers are a totally different gang. The way you present yourself to your readers varies and there’s no set indicator for what makes up a good platform in fiction. So we’ll go with the basics. I consider my platform to consist of Twitter, facebook, goodreads, my book blog, and my writing groups. In those I actually meet with live bodies and do readings and critiques in person.

3) Number of people adding your book "to-read" on Goodreads: I have to mention how it was for me in the beginning of this journey again. I was practically begging for friends. But now, I get almost 20 requests per week on GR alone. These people are telling me they've heard good things about my works from their friends. It's a bit overwhelming but very flattering. Thanks everyone.

4) Sales:  Yes, I put this indicator at the bottom of the list for a reason. When you're an indie, it's all about marketing your debut novel during that first year. Find a way to keep your book in front of people during the period where you're working on your second and third books. Or even better, if you can start out with 2-3 books then your readers have instant options right away. Others have found success this way and I do believe it works.

I also notice that the more I promote, the more copies get gobbled up. Being that we indie authors/small presses are in a minority group so to speak, we have to push harder to get our names out there. Some things that are working for me, might not necessarily work for others. But I'm willing to share my tips and help my fellow indie friends out. Participating in blog tours, giveaways, and hops is also another good way to get your books out there before and during your book launch. If you have any more questions about how virtual tours work, I'll be happy to answer them.

5) Fan Clubs.  The last strategy but by no means the least important one. They work…big time. If you have any doubts, then know that a group of die-hard fans started the Twilight group on MySpace. Cassie Clare’s fan club known as Mundie Moms started on twitter before they branched out into their own review site. And the Hush Hush club known as Fallen Archangel friended me on facebook years ago. Now they have people overloading their facebook feed wanting to get in the club.

These are just a few tips. I didn’t go into reviews and speaking engagements. I’d like to save those for part two of this post since they could take up numerous pages alone. I hope that you find these tips and pointers helpful in some way. And I wish you much success in all of your literary journeys. 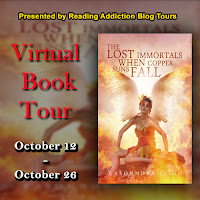