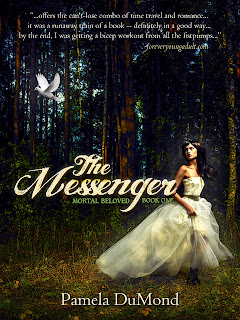 
Summary: Some souls are meant to be together, but pursuing true love can be dangerous and often deadly. When sixteen-year-old Madeline falls in love with Samuel, a boy who lives hundreds of years before she is even born, she will risk her very existence to be with him.

Madeline’s from present day Chicago when she is pushed onto the train tracks, and accidentally time travels to a bloody war between the Natives and the colonists. She falls in love with a Native boy, Samuel. But, she’s living in the body of a colonial girl and their romance is a crime that carries harsh punishments.

Madeline discovers that she is meant to be a Messenger, a traveler who if properly trained, can slip through time's fabric at will. The Medicine Woman mentors her. But Madeline doesn't fit in this world. She’s different from the other colonists. Rumors of witchcraft and spying arise. Deadly Hunters, dark-souled predators as well as skilled time travelers, crave Madeline's powers. Can Madeline find the way back to her future? And will that future include her one true love, Samuel?

There are two things I like about science fiction. One is time travel, the other is aliens (the hot kind of aliens, not the little green men kind). But The Messenger involves time travel. Madeline is taken all the way back to 1675 Rhode Island during the King Philip War. She learns that she is a Messenger, she's trained by a Medicine Woman, and finds love with a Native boy named Samuel. But there are those that are after her and her power.


The Messenger is a gripping tale that I really want more of! 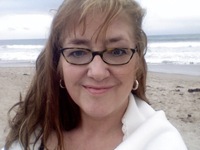 Pamela DuMond is the writer who discovered, pitched and sold the real-life Erin Brockovich story to Hollywood. Erin Brockovich the movie was nominated for four Academy Awards.

In grade school Pamela was an A student but stuttered and was bullied. Reading became her refuge. She devoured every thriller and mystery she could get her hands on and eventually wrote her own. When she was twenty-two years old she finally started talking. Her brother swears she hasn't shut up since.

Pamela writes comedic sexy Cupcakes mysteries: Cupcakes, Lies, and Dead Guys (An Annie Graceland Mystery) was published by Krill Press in 2010. She published Cupcakes, Sales, and Cocktails – A Novella in 2011 and Cupcakes, Pies, and Hot Guys in 2012.

Pamela also writes YA. The Messenger (Mortal Beloved, Book One) is the first in the series of YA romantic time-travel historical thrillers. She was inspired by The Hunger Games books by Suzanne Collins and Last of the Mohicans the movie.

Pamela is also a chiropractor and cranio-sacral therapist. Besides reading, writing, she loves the beach, yoga, movies, animals, her family and friends. She lives in Los Angeles, California, with her furballs and welcomes appropriate questions and feedback from her readers. Feel free to contact her at Pamela.DuMond@gmail.com.

Links to find/buy the book: 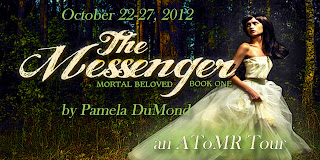 Posted by Christina @ Biblio Thoughts at 9:00 AM