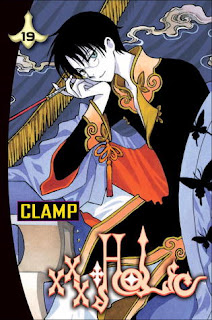 Summary: Kimihiro Watanuki has passed through many trails by fire. Once an indentured servant, he has matured and become the poised and skilled keeper of the shop that grants wishes. But Watanuki's final wish is for himself: to meet the witch Yûko one more time. With Yûko long vanished from our world, is it even possible? That question and others are answered now in the concluding volume of the bestselling manga xxxHOLiC!

xxxHOLiC crosses over with Tsubasa, also by CLAMP. Don't miss it!

Everyone has something they desire. The shop that grants wishes is there to grant those desires--whether they be a blessing or a curse to the wisher. Not every wish has a pleasant outcome and it's up to the customer to heed the warnings and advise of the shopkeeper.

The first story is about the five seasonal festivals, most importantly the Chrysanthemum Festival. This festival was created to eliminate bad luck. When "light" is strongest is when the worst disasters occur. The Ame-Warashi talks about what happens when those who go by the old calender (magical beings) get fed up when people change things according to the new calender without taking notice of the old. Eventually humans pay the price, sooner or later.

Then Watanuki meets a young woman waiting under an umbrella. She says that "He...never seems to come. But he promised. He said, 'If it's under this umbrella,' and held my hand as he promised." Her wish is to be reunited with her young man. But a "Serpent's Eye" talisman that wards against voyeurism is preventing him from meeting her. The fact that they could only meet under the umbrella suggests they have a relationship they want no one to see. Watanuki quotes the saying "At night, from a distance, or under an umbrella," which are all the ways a woman looks more beautiful, but they are all ways in which you can't see them very well.

In the third story we learn that Himawari is married and we see how beautiful Kohane has grown up to be. And Domeki is just Domeki. Domeki brings an artifact to Watanuki that his professor wanted him to look at and identify. Watanuki speaks to the spirit of the artifact and discovers that it is a Hei-Gushi. A Hei-Gushi is a decoration put on a house's main support beam to celebrate the completion of the framework of the house. It's used as a charm to ward off evil and help ensure the happiness of the family that will live in the house.

And finally, in the last and final chapter of the xxxHOLiC series, Watanuki dreams of a butterfly. After the fourth night of dreaming of the butterfly, Watanuki sees Yûko for the first time. During the sixth night, Watanuki sees Yûko for the second time. This time she's holding a cage with a bird in it. She releases the bird and Watanuki says, "That's what it is. So that much time has passed since I inherited the shop." It was a dream Yûko had a long time ago and sent to Watanuki to tell him that he's strong enough and there is no need to hide himself away in the shop anymore. When asked if he'd like to forget about Yûko, Watanuki says no and commits to continuing as the keeper of the shop. So he can wait for Yûko. Domeki remarks that, "For him, even now, forgetting Yûko-san seems like it would be more painful than not forgetting."

This finale to xxxHOLiC is more somber than most of the series finales by CLAMP. Because of this it didn't have as big of an impact on me like some of their more explosive or emotional finales. So I was just a teeny bit disappointed.

Although I wasn't happy with the conclusion, it did make sense. When Yûko disappeared and Watanuki inherited the shop, it was revealed that Syaoran (Tsubasa) and Watanuki are the same person, but they were split when Syaoran made his wish. In order for Syaoran to move forward to look for Sakura, Watanuki had to remain in the shop to wait for Yûko. In the final chapter, Watanuki sees a dream Yûko left for him, showing the release of a bird, which is Watanuki's signature and symbolic of him, signifying that Watanuki is now strong enough to move forward on his own and leave the shop. Though he is now free, he chooses to remain as the shopkeeper and continue waiting for Yûko (talk about dedication!).

One thing about the conclusion that left me a little confused was when Watanuki mentioned that he's been the shopkeeper for more than a hundred years. Like I mentioned before, in order for Syaoran's time to move forward, Watanuki's needed to stop, so Watanuki still looks the way her did when he was in high school, while all his friends are growing older. What confused me about the more than a hundred years as shopkeeper part is that, how could that much time go by and all his friends still be alive? The only thing I could think of was that time moves differently in the shop than outside the shop.

In a previous volume, Yûko had given to Domeki an egg-like item that he could use to protect Watanuki, and that he would know the right time to use it. He still has not used it and says, "I guess it still isn't the time to use this." I mean, what was the point of the egg-like object if it's not even going to be used? Yûko made it sound like something very important, and by the end of the series it's still not even been used. Talk about waste!

I really like the final line of the series, though. Domeki says, "For him, even now, forgetting Yûko-san seems like it would be more painful than not forgetting." And the final image is of a bird flying free, representing Watanuki's freedom to move forward if he chooses. For Watanuki's story, that is the perfect image to end the series with.

CLAMP originally began in 1989 as a twelve-member dōjinshi circle, but by 1990, the circle had diminished from twelve to seven. Of the remaining seven, Tamayo Akiyama, Sei Nanao, and Leeza Sei left the group during the production of the RG Veda manga. Other former members of CLAMP also included Soushi Hishika, O-Kyon, Kazue Nakamori, Yuzuru Inoue and Shinya Ōmi. Currently, there are four members in the group.

In 2004, CLAMP's 15th anniversary as a mangaka group, the members changed their names from Nanase Ohkawa, Mokona Apapa, Mick Nekoi, and Satsuki Igarashi to Ageha Ohkawa, Mokona, Tsubaki Nekoi and Satsuki Igarashi (her name is pronounced the same, but written with different characters) respectively. The August 2004 issue of Newtype USA, a magazine specializing in events of the anime and manga subcultures, reported that the members of CLAMP simply wanted to try out new names. In a later interview with Ohkawa, it was revealed that initially Mokona wanted to drop her surname because it sounded too immature for her liking, while Nekoi disliked people commenting that her name was the same as Mick Jagger's. Ohkawa and Igarashi, wanting to go with the flow of Nekoi's and Mokona's name changes, changed their names as well.

In 2006, they made their first USA public debut at Anime Expo in Anaheim, California. They were well received at the convention, with 6,000 fans in attendance at their panel.
Posted by Christina @ Biblio Thoughts at 3:53 PM