Tour Review: Rae of Hope by W.J. May (Promo) 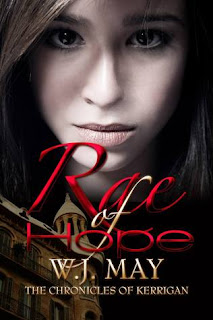 Summary: How hard do you have to shake a family tree to find out the truth of the past?

Fifteen-year-old Rae Kerrigan has never questioned her family’s history. That is until she accepted a scholarship to Guilder Boarding School in England. Guilder is a very unique, gifted school.

Rae has no idea what she is getting herself into or that her family’s past is going to come back and taunt her. She learns she is part of an unparalleled group of individuals who become marked with a unique tattoo (tatù) on their sixteenth birthday. The tatù enables them to have supernatural powers particular to the shape of their marking.

Both her parents were marked though Rae never knew, as they passed away when she was young and never told her. Learning about her family’s past, her evil father and sacrificial mother, Rae needs to decide if there is a ray of hope for her own life.

When Rae receives a scholarship to Guilder Boarding School, which was originally an all-boys school, now enrolling girls, her uncle jumps at the chance for Rae to attend his alma mater. But there's more to Guilder and its students (and apparently Rae) than meets the eye.

When Rae meets her roommate, Molly, she's introduced to the world of the tatù (taa-toe; rhymes with shoe). Molly tells Rae that on their sixteenth birthdays they will receive an ink that will grant them special powers. The ink appears on the arm of boys and the lower back of girls. Devon is the first inked boy she meets at Guilder. He has also been assigned as her tutor and quickly becomes one of the few that Rae feels she can trust.

What's odd is that everyone Rae meets seems to know more about her and her past than she does. Turns out that her father was a very dangerous man and her mother may have sacrificed everything to save her. A common saying in the murmurs that follow Rae is, "the sins of the father are the sins of the son, in this case the daughter." Rae is living under the shadow of her fathers misdeeds and is trying to fight off the demons of the past. She can't change the past, but she's her mother's "rae of hope."

I really loved the whole tatù concept. It was fun learning about each new tatù and the powers they gift, and it was really exciting anticipating what Rae's tatù would be. With her mother's ink being the sun and her father's ink being a wizard or sorcerer, I couldn't wait to see what Rae's ink would look like and which of her parent's gifts she inherited. When it finally appeared on her birthday, I could picture it in my head perfectly, it just seemed so beautiful. I would love to see concept art for Rae's tatù.

I know that Rae's past and the anticipation of her tatù gain her a lot of attention, but I thought that the male attention she gained was a little over the top. It just seemed that at times EVERY SINGLE GUY was falling over himself to get Rae's attention. Although it did provide some entertaining moment, and I even felt bad for the guys, because Rae is obviously infatuated with Devon.

The dynamic between Rae and Devon was excruciating and tortuous (in a good way) at points. Rae is completely head-over-heels for Devon, but he has a girlfriend. There are moments so sweet between them and you totally think they're going to get together, but then something happens to put space between them again. But the push-and-pull was definitely worth it in the end.

I haven't been this satisfied with a book's conclusion is quite a while. All loose ends are tied up real nice, there's promise for a great (and complicated) romance, and I was left with a smile on my face. I can't wait to for the next installment in the Chronicles of Kerrigan series. 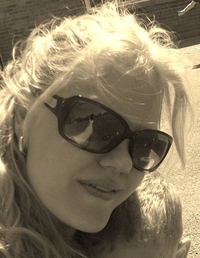 Wanita May grew up in the fruit belt of Ontario - St.Catharines. Crazy-happy childhood, she always has had a vivid imagination and loads of energy.

The youngest of six -- four older brothers, and a sister -- taught her at a young age to be competitive in all aspects of life.

At sixteen, she began competing in athletics (track and field) and before she turned seventeen, she was representing Canada in high jump. She continued to compete, breaking Canada's JR High Jump record (1.92m - 6' 3 1/2" for those metric-ly challenged). She attented University of Toronto, and Kansas State University - winning CIAU's and becoming All-American 6x - NCAA Indoors Runner Up + more.

Life continued with her husband (a distance runner from Liverpool, UK, who she met at KSU) and then their first, then second and finally third child. Their house became full of more imagination and stories.

After her father passed away in 2009, from a six-year battle with cancer (which she still believes he won the fight against), she began to write again. A passion she'd loved for years, but realized life was too short to keep putting it off.

Her first book, Rae of Hope - from the Chronicles of Kerrigan - will be available October 2011 by kNight Romance Publishing.

She is currently represented by Dawn Dowdle of Blue Ridge Literary Agency. Wanita is a writer of Young Adult, Fantasy Fiction and where ever else her little muses take her.

WHAT REVIEWERS ARE SAYING:

Ok, I really liked this book! Rae Kerrigan was orphaned at six years old and has been living with her aunt and uncle in New York since the fire that killed her parents. Now fifteen, she is returning to England to go to boarding school. Not sure how she got in, since she did not apply, and with an uncle pushing her to go, she’s a bit nervous about the coming school year. Things get more interesting for Rae when she finds out that the Guilder School is for kids with powers… special powers from a tatú they receive on their sixteenth birthday, and that she will have one too. There were a lot of really likeable characters in this book, from roommate Molly to cute boy Devon along with a cast of others. A twist towards the end of the book kept me guessing. I read this book in one afternoon and couldn’t put it down. I am really looking forward to reading the next book in the series.
~4.5/5 stars

This was a fantastic read, it is very well written and grabs your attention from the very first chapter, the more I read the more engrossed I became, so much so that I couldnt wait until bed time to read the last two chapters(which is when I usually read, once my little boy has gone to bed!!) I actually snook upstairs to read them whilst my hubby & son where preparing the dinner!! There is only one dissapointment and that is that I will have to wait longer than 7 weeks to see what happens next term............Fans of Harry Potter will love this book!!well done W.J.May but hurry up with the next one!!!
~5 out of 5 stars by Emilymoo 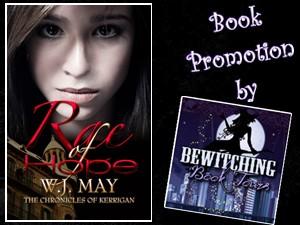 Promotion Hosted by Bewitching Book Tours
Posted by Christina @ Biblio Thoughts at 12:01 AM