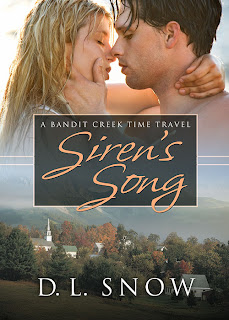 Summary: After giving up fame, Joss Jones just wants a normal life. Maybe she’ll find it in Bandit Creek. Or…maybe not. From the moment she moves into the old mansion she inherited, she’s stalked by a ghost who torments her before dragging her back in time to Bandit Creek, 1899.

Has she gone crazy or is this old mining town, full of saloons, gambling, whoring and fortune seekers her new reality? It feels real enough as does the ghost who brought her here. His name is Morgan Hawes and he is very much alive. Is Morgan the key to Joss finding her way home or is Joss stuck for the rest of her life as the Siren of Bandit Creek?

Review: (SPOILERS MAY BE PRESENT)

Joss Jones is unsatisfied with her life and just wants some normalcy after a childhood as a teen idol singer. She hopes she'll find that normalcy in Bandit Creek when she inherits her grandmother's house and a 1983 Firebird. But she finds nothing close to normal when she arrives at her new house and she's stalked by the ghost of a young man who seems to have a message for her.

When Joss goes to the James Ellis School for a job as the music teacher, she learns that her ghost is Kyle Copeland, who disappeared from Bandit Creek without a trace ten years ago. After Joss meets some of the students and questions of her accident, that took her mother's life, are voiced, Joss is overwhelmed and runs to the lake. Kneeling at the edge if the lake, crying out her sorrow and frustration, Joss hears the song she'd been dreaming about:

When she looks down at her reflection in the lake, it isn't her reflection, but Kyle's and suddenly she's being pulled into the lake by a very real and very solid Kyle Copeland. But when she wakes up she's in a very different place, with very different people. But one person looks familiar: Is Morgan Hawes who he claims to be or is he really Kyle Copeland? Will Joss ever be able to get home or will she be forever known as the Siren of Bandit Creek? And if she does make it home, will her heart be forever lost to a man in 1899 Bandit Creek?

I completely fell in love with Siren's Song. I was intrigued by the mystery of Morgan Hawes and his connection to Kyle Copeland, as well as the coincidence (or not?) of Kyle's disappearance ten years ago in Joss's original timeline and Morgan's presumably fatal attack by muggers ten years back in 1889 that he was miraculously saved from.

I could feel Joss's desperation to return home. From accosting Morgan on Main Street thinking him to be Kyle, trying to drown herself in a pond thinking that water is the medium between times, to becoming the Siren of Bandit Creek to gain more freedom to search for a way home. Then her relief when she sees two Native Americans ride into town, one of them wearing modern clothes from her time, only for him to tell her that a traveler must find their own way to where they must go. It was an up and down journey that was interesting to read about. Not to mention the whole time travel occurrence (who would have thought?).

When Joss is separated from Morgan in the mines on Turtle Mountain after accepting his marriage proposal and the mountain continues to move, she knows that she's being sent home and leaves her mother's gold cross necklace with Morgan along with her love. It was completely heartbreaking when Joss wakes up and leaves the mines knowing that she'll never see Morgan again. She sings Promised Land as a heartbroken farewell to the man she'd left in the cave.

I didn't really understand what the Native traveler meant when he said that time was not a straight line but a circle until Joss comes to the lake and sees herself there crying then being pulled into the lake by Kyle. Joss realizes at that point that they are fractured parts of the same person. This is further proved when Joss returns to her house, notices some differences, and finds a sapphire ring, a wedding photo, family photos, and a note to her from herself:

(HUGE SPOILERS AFTER THIS POINT. READ AT YOUR OWN RISK!)

I loved that the song Promised Land is the connection between Joss and Kyle (Morgan) through all times. In Joss's current timeline, Kyle didn't disappear, but is a famous singer whose #1 hit single is Promised Land. i was extremely happy that they got their happily ever after in the end. Kyle even had in his possession Joss's mother's gold cross necklace, which she had given Morgan in the cave before she was sent home.

"No," he grinned. "I've been here, waiting for you the whole time."

Siren's Song is a mystery wrapped in a heart-wrenching love story that spans all different times. I laughed, I cried, I gasped, and I raged. Like Joss was pulled into the lake by Kyle, I was pulled into this story by D.L. Snow. I'm glad I didn't pass this one up. 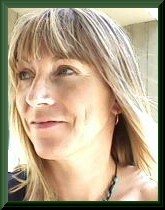 DL Snow spent her youth living by trial and error. From touring with an international performing group, backpacking through northern Africa to living bohemian style in Berlin, she pursued adventure and passion from one place to the next, never really knowing where she’d end up. She’s been a wildlife technician, a rock climbing instructor, a tailor’s assistant (measuring men’s inseams – someone’s gotta do it!) and a high school social studies teacher.

It wasn’t until she met the love of her life, the son of a Nakoda chief, and started a family, that DL found her true calling – writing. Now, she writes about passion and adventure and is happy to say her characters never know where they are going to end up. Find out more at www.dlsnow.ca

Promotion Hosted by Bewitching Book Tours
Posted by Christina @ Biblio Thoughts at 12:01 AM