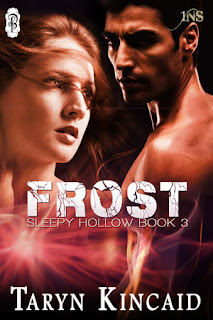 Maxwell Raines, a fire-sex demon, lives a life of solitude and seclusion behind the walls of his compound at Sleepy Hollow, channeling his lustful impulses into his art—until his muse deserts him and his temperature rises past the danger point. He needs sex. Now.

When Madame Evangeline arranges a torrid Valentine’s 1Night Stand for them, will the flames of their encounter be too hot to handle?

Dagney followed her sister’s glance, and her heart flipped like a gymnast unable to nail a vault. Darkness swathed the gallery with the exception of the lights above or below each of the paintings. The large man emerging from the shadows held her rapt. Waves of pure, unadulterated lust smacked her with such force she didn’t even see Lily and Campbell leave. The blast of raw desire crumpled her to the floor. Her gaze remained riveted on the tall hunk of ferocious male stalking toward her, radiating undiluted carnality. He set something carefully on the floor and grasped her by the elbows, his touch surprisingly gentle when he lifted her to her feet.

Yeah. No kidding. Who else could a guy so hot, so studly, possibly be?

She told herself not to swoon. Ordered herself not to swoon. But, Goddess, that rumbling voice. More potent than a train barreling over the tracks. And he smelled so good. Sinfully masculine. A bit of musk, a bite of pine, an essence of dark, smoky nights. Sexy scents. Reminiscent of tangled satin sheets that had been given a good work-out.

Her legs turned to rubber, and she doubted they’d support her on their own. She’d be mortified if he’d have to scrape her puddled body up again. But he hadn’t yet relaxed his grip. Could she bullshit her way through the meeting without collapsing? “You’re late,” she said.

“Well, the party’s over, Mr. Raines.” She waved a hand around the empty room.

“Depends on your perspective.”

“You’re big on perspective, are you?”

“Right. But as you can see, everyone’s left.”

“You haven’t.” He gazed down at her, a black brow flaring. “And you’re what I’m here for.”

A former award-winning newspaper reporter and columnist, Taryn currently slaves away in the booby-trapped field of law, escaping into the delicious world of romance every chance she gets. She is a member of Romance Writers of America, Hudson Valley RWA, RWA’s Beau Monde chapter, RWA’s Fantasy, Futuristic & Paranormal chapter, and RWA’s Electronic & Small Press Authors Network.

She lives in the historical Hudson River valley region outside of New York City, where the shopping is fabulous, the scenery is awesome, and things can very often be relied upon to go bump in the night.

Taryn loves to hear from you! Find her on Twitter, Facebook, Goodreads, and her author page at Amazon.com.  Check out the CONTACT page to email her and feel free to leave comments on the BLOG. 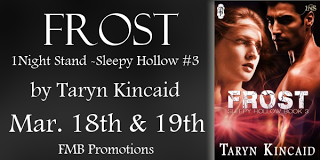