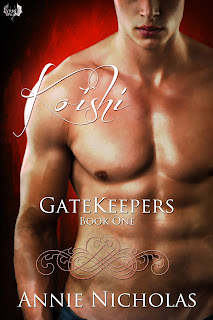 Tagline(s): Never make a deal with a dragon.
Summary: Sandra’s sister is dying. Doctors say nothing can be done, but she refuses to give up hope. She has depleted all their resources searching for a cure, when a little bird whispers in Sandra’s ear about secret worlds, gates, and the keepers who protect them. A dragon gatekeeper, who hoards magical treasure within his volcano home in Japan, possibly owns an item capable of curing her sister.
Gates choose their keepers, and Koishi thinks his did an excellent job in picking him. Not many dare to cross, and none who try survive. However, one tiny human female with either the courage of an army or the intelligence of a gnat has arrived on the island asking for him. Curious, he waits for the locals to steer her to his human servant—actually him, in man form.


“Thank you.” Sandra shifted the weight of the pack on her back and marched toward the street.
The stranger twisted as she passed him, his gaze weighing heavily on her. “It’s about a three hour walk to the nearest hotel. If you run, you might beat the storm.”
She spun around. “What?” she wanted to smack that stupid grin off his face. The trip across the strait had been harrowing enough. She wasn’t in any shape to hike in a storm. “Do you have cabs?”
“Yes.” He approached her. “During tourist season.”
“Then how do people move around the island? There have to be buses.” She peered at the storm clouds, which appeared closer than before. She hadn’t considered the consequences of rushing here. Time was running out and she’d jumped on the first flight out to Japan.
“They walk or bike. There are a few buses, but I don’t know their schedules.” His gaze lowered to the opening of her blouse. “Maybe we could come to some kind of arrangement.”
Gasping, she clutched the edges of her blouse shut. “I don’t think so.” She must look better than she felt or smelled. How could anyone be interested in her in this state?
He rolled his eyes. “I meant your necklace.”
“Oh.” The heat of her mortified blush almost blistered the skin off her cheeks. Of course, he wasn’t making a crude pass at her. He was only trying to swindle her. Nice.
He gave her a crooked smile as if he knew exactly what she’d been thinking. “The gold reflects the light very nicely.” Reaching for her jewelry, he bypassed her swatting hands until he held the small heart-shaped pendant in his palm.
She yanked it away. “It’s not up for trade. My mother gave it to me.” She’d died in her sleep a year earlier after a long, happy life. Out of all the things from her estate, Sandra had only wanted this necklace. Her father, who’d passed years ago, had given it to her mother when they’d first met.
“It has a nice weight to it and is well crafted.” His gaze lingered on her necklace for a second longer before meeting her stare. “I have a truck. I could drive you into town where you would have a pick of fine hotels.”
“That’s very kind of you.”
“For the necklace.”
She growled like a rabid dog. Yes, it had been that kind of day. “I said no. Nain!”
“Nine?”
“What?” She threw up her arms and abandoned all hope of help.
“That’s what you said. Nine what? Rides? I usually don’t play taxi for tourists, but…” His gaze grew heavy with darker promises. “For you, I’d offer a ride on me.”
She blinked. Did he understand what he’d just said? “I think we lost something in translation.” In both their cases. “I’ll manage on my own.” Stalking to the road, she ignored his laughter and pulled out her phrase book. Lost and tired, all she wanted was a room. Maybe she could stay in someone’s home for the night. But how did she ask? These sentences were more tailored for people who had already arrived at their destination. Where is the bathroom? Where is the phone? She didn’t see a Can I spend the night? written anywhere. Then again, that could translate improperly and she’d end up in a worse situation.
Reaching the road, she turned right and kept searching for some kind of help. Another American tourist, an embassy, or even a flipping McDonald’s would be welcome.
A pick-up truck slowed next to her and the window rolled down. “Maybe you have something else to trade?”
The stranger had followed her and she gave him a what-the-hell look.
“I’d hate for you to walk all that way after such a harrowing boat ride.” He winked at her.
“That’s very kind of you.” She stopped walking, forcing him to slam on the brakes to maintain their conversation. Could she trust this stranger who exhibited a touch of stalker tendency? Flashes of serial killer music sang through her thoughts. She glanced around at the mostly empty road. What choice did she have? At least he spoke good English so when he murdered her she’d understand his evil monologue. “Maybe you could offer to drive me for free?”
He stared at her with mock surprise. “There’s such a thing?”
“Yes.” She dropped her pack to the ground, her shoulders already aching, and tried her best to not smile back at the jerk.
Leaning forward, he tilted his head to the side. “Why?”
She shook her head. “It must be a cultural thing.” Kneeling, she rummaged inside her bag and pulled out her wallet. She was on a tight budget. All her savings had gone to purchasing information. “How much?”
“Money?” He grimaced. “I don’t like paper. Don’t you carry anything valuable?”
“Most people would consider money valuable.” She mumbled under her breath as she shoved her wallet back into her pack. With a little more digging, she found her small carrying case and held out two silver earrings. “That’s all I’ve got. Take it or bug off.” She laid them on his outstretched hand.
He sniffed at the metal. “There’s not much silver in this.”
“How can you tell?” Her shout echoed over the water.
“I just can. Get in. I’ll give generosity a try.”
She climbed inside the old cab with peeling leather seats before he could change his mind. “It’s only charitable if you don’t keep the earrings.”
He dropped them in his breast pocket. “Believe me, this is charity.” 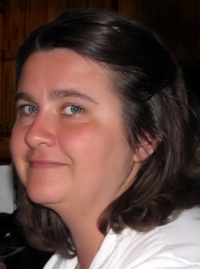 Annie Nicholas hibernates in the rural, green mountains of Vermont where she dreams of different worlds, heroes, and heroines. When spring arrives the stories pour from her, in hopes to share them with the masses one day.

Mother, daughter, wife are some of the hats she happily wears while trudging after her cubs through the hills and dales. The four seasons an inspiration and muse. 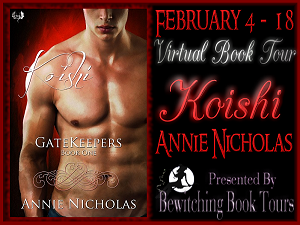