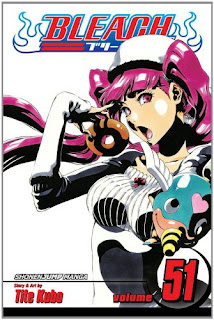 Tagline(s): Don't put your finger
In my heart

Summary: Knowing Tsukishima is after Ichigo, Ginjo continues the Fullbring training at a secret base. Ichigo is mastering Fullbring at an incredible speed and regaining his lost powers, but is he ready to face Tsukishima just yet...?

As Ichigo is fighting Jackie and her Fullbring Dirty Boots, Tsukishima attacks! Ichigo fights him, but his Fullbring isn't quite there yet. Yukio uses his Fullbring, Invaders Must Die, to place Ichigo in a different dimension and away from Tsukishima. Ichigo's next training opponent is Ginjo himself and his Cross of Scaffold. Orihime is brought in to help with Ichigo's training. And Urahara and Isshin's plan moves forward with a little help from the Soul Society.

In Ichigo's battle with Jackie, we get a glimpse of how little they know about Ichigo's past experience as a warrior. "I was a Soul Reaper for only a short period. But in terms of experience...I got more then you guys." It's after this that Ichigo's Fullbring advances into a clad-type. "For Ichigo, wearing his power is his true form." This form of his Fullbring isn't complete, but it looks just like his shihakusho.

After Tsukishima's attack, Ichigo continues his training. His next opponent is Ginjo. Chad brings Orihime to help with this stage of training to heal Ichigo when needed. It's funny to see Riruka get a little jealous when she sees Orihime. She wants to dislike Orihime, but Orihime has a way of making everyone like her.

We see vague images of Urahara and Isshin going about their mysterious project, and with the help of a Soul Reaper. In the meanwhile, Ginjo takes drastic measures by blinding Ichigo. What is Urahara and Isshin up to? Who is the Soul Reaper helping them? What does it have to do with Ichigo? And now that Ichigo's sight has been taken from him, will he be able to defeat Ginjo? These are all questions I was left with by the end of this volume--I can't wait for the answers in the next volume.