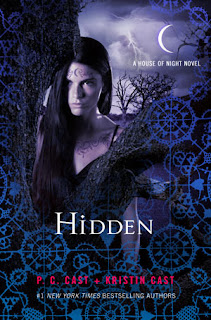 Summary: At last, Zoey has what she wanted: the truth is out. Neferet's evil has been exposed, and the High Council is no longer on her side--but she's far from done wreaking havoc in the vampyre world. First, a mysterious fire ravages the stables. Then, Neferet makes a devastating move that will test them all.

With the seeds of distrust sown and Darkness breeding chaos at the House of Night, everyone must band together--but that's proving to be more difficult than ever before. The twins are barely speaking and the House of Night's former enemy, Kalona, has now become their warrior, pushing their trust to the limit. To top it off, Zoey is pretty darn sure she might be losing her mind. She saw something when she looked at Aurox through the Seer Stone that she can hardly explain to herself, let alone her friends. Is it possible that Heath has come back in a different form? Is that why Zoey's so intrigued by Aurox, when it's so obvious that he's dangerous? And who would believe her if she told them? Zoey knows that following her instinct about Aurox might by just what they need to defeat evil...but if she's wrong, it could cause the destruction of those closest to her.

With the tension at a breaking point and friendships on the line, can the nerd herd come together to stop the spread of Darkness before it's too late?

The tension really is at a breaking point in Hidden. Neferet has been outed and shunned by the High Council. Friends and enemies are changing sides. And Darkness is coming out of hiding.

When I read Lenobia's Vow, I wondered whether Travis could be Martin reborn. It was when Lenobia described the color of their eyes that left me thinking that Martin has kept his promise and come back to her as Travis. When the stables caught fire, shortly after Lenobia had awakened from dreaming of that long ago night when Martin saved Lenobia and died in a similar stable fire, I feared they were going to repeat history. Lenobia's strength in the face of a possible repeat of the worst night in her life was amazing, and that strength and determination saved Travis. This moment in the very beginning of the book not only bridges Lenobia's Vow and Hidden, but it also sets the stage for this tension filled continuation of the House of Night series.

I was very moved by Aurox and his struggle to be on the side of Light, even though he was created of Darkness. I think one of the most powerful moments was between Aurox and Grandma Redbird. She showed him kindness and forgiveness when he felt hopelessness and loneliness in the aftermath of Dragon's death and the reveal ritual on the lavender farm. We know that Zoey saw Heath when she looked at Aurox through the Seer Stone, so the question is: Does Aurox have genuine good within him, or is it only Heath's influence? I think Heath helped it along, but that Aurox is genuine about wanting to be on the side of Light. But because he was made of Darkness, he will have a near constant struggle to remain on the side of Light.

With Thanatos taking over the role of High Priestess of the Tulsa House of Night, Zoey kind of takes a step back from the leadership role. When Neferet goes to the City Council and involves humans in vampyre affairs, even slandering members of Zoey's group, a sort of war of wits, battle of wills, takes place between Neferet and Thanatos. While it's a well-deserved break for Zoey, I loved watching Neferet and Thanatos trying to one-up each other at every turn.

There were so many unexpected occurrences that kept me on my toes. Some weren't that surprising, and some were completely shocking. One of the shocking events was the appearance of Kalona's brother and Nyx's Consort, Erebus. He tries to get Kalona to leave the Tulsa House of Night and to stay away from vampyre society. Kalona refuses, stating that he will not be an oath breaker again. Supposedly Nyx knew nothing of Erebus's actions, but I found that hard to believe. Being a goddess, Nyx would know everything happening with her people.

And something I'm sure everyone will be happy about is that Damien may have found someone, not to replace Jack, but the space left behind by him, when he met the human reporter, Adam Paluka. It'll be interesting to see where that will go.

A lot of changes, good and bad, happened in Hidden, and I can't wait to see what impact they have in the next book.

"Heath was my humanity. And now it looks like he's become your humanity."

P.C. Cast was born in the Midwest, and grew up being shuttled back-and-forth between Illinois and Oklahoma, which is where she fell in love with Quarter Horses and mythology (at about the same time). After high school she joined the United States Air Force and began public speaking and writing. After her tour in the USAF, she taught high school for 15 years before retiring to write full time.  Ms. Cast is a New York Times Best-Selling author and a member of the Oklahoma Writers Hall of Fame.  Her novels have been awarded the prestigious: Oklahoma Book Award, YALSA Quick Pick for Reluctant Readers, Romantic Times Reviewers’ Choice Award, the Prism, Holt Medallion, Daphne du Maurier, Booksellers’ Best, and the Laurel Wreath. P.C. Cast is an experienced teacher and talented speaker. If your organization is interested in information about her workshops or presentations, please contact her personal assistant, Camden Clark, at camdenclark.pa@gmail.com. If the request is specific to her young adult series, you may contact her St. Martin’s publicist, Rachel Ekstrom, at rachel.eckstrom@stmartins.com. Ms. Cast lives in Oklahoma with her fabulous daughter, her spoiled cat, and her adorable Scotties!

Kristin Cast is a NY Times and USA Today bestselling author who teams with her mother to write the House of Night YA series. She has stand alone stories in several anthologies, as well as editorial credits. Currently Kristin attends college in Oklahoma where she is focusing on attaining her dream of opening a no kill dog rescue shelter in midtown Tulsa.
Posted by Christina @ Biblio Thoughts at 4:33 PM