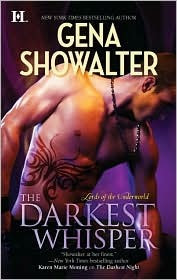 Tagline(s): He is the keeper of Doubt and his entire world's about to be rocked.

Summary: Bound by the demon of Doubt, Sabin unintentionally destroys even the most confident of lovers. So the immortal warrior spends his time on the battlefield instead of the bedroom, victory his only concern...until he meets Gwendolyn the Timid. One taste of the beautiful redhead, and he craves more.

Gwen, an immortal herself, always thought she'd fall for a kind human who wouldn't rouse her darker side. But when Sabin frees her from prison, battling their enemies for the claim to Pandora's box turns out to be nothing compared to the battle Sabin and Gwen will wage against love....

The Darkest Whisper shows us that even the strongest and most confident individual has doubts. Sabin, leader of the Greece Lords and Gwen, the timid and youngest daughter of the Skyhawk harpy clan, have to overcome their doubts and insecurities to find the truth.

Sabin's demon is Doubt. His demon targets an enemy's insecurities and makes them doubt themselves. This is a great weapon against the Hunters. Sabin is the most driven Lord in the war with the Hunters, a drive that is fueled by the murder of his best friend, Baden, keeper of Distrust. Though Doubt is beneficial to battle it's not beneficial to an intimate relationship. All the women Sabin has been involved with have doubted themselves so much that they eventually met an unfortunate end. This has lead Sabin to forsake romance and commit himself further to the war with the Hunters. That is until he met Gwen.

Gwen has her own share of doubts--in fact, she steeped in doubts, and was named Gwendolyn the Timid because of them. She doubts her own strength and ability to control her darker side. But Sabin knows her true strength and knows that she would be a lethal addition to his battle with the Hunters, if he can only get her to stop doubting herself (which is a feat in itself for someone possessed by Doubt himself). What he doesn't expect is for Doubt to fear Gwen's harpy...

The Darkest Whisper is the most action-packed book in the Lords of the Underworld series so far. It starts off right away with the Lords searching the pyramids of Egypt for the Cloak of Invisibility and coming upon a facility breeding immortal Hunter children. The Hunters kidnap immortal women, rape them, and then take the children away from the mothers after they are born to train them as Hunters to fight against the Lords. Sabin and the other Lords take out the Hunters in the facility and free the women--some of whom are already pregnant. Gwen is one of the women the Hunters kidnapped, but she was left physically untouched thanks to the power of her harpy. The Hunters were too terrified of her and kept her locked up, forced to watch the other women being abused and not being able to do anything to help them. The attack on the breeding facility was a huge blow to the Hunters and they keep trying to get Gwen and the other women back by launching attack after attack. The chemistry between Gwen and Sabin at that first meeting was instantaneous, but each has doubts and worries that keep them from moving toward anything romantic.

I thought that the harpy consort concept was interesting. I was wondering about Sabin's ability to calm Gwen when she's going harpy. Consorts are forever, and it's very rare that a harpy finds her consort. A harpy is an independent free spirit, but every so often she will find a male that pleases her. His touch and smell become like a drug to her, and his voice soothes her fury. So it's like no matter how much Gwen and Sabin fight against it, they will keep coming back to each other because they will want no one else.

We get to see more of Paris, Aeron, and Torin's POVs. Paris is still lamenting Sienna's death and is now drowning himself in ambrosia-laced alcohol to relieve the pain. Aeron leans of Paris' sacrifice and tries everything in his power to help Paris, all the while feeling invisible eyes watching his every move. And Torin contemplates his relationship with Cameo while he watches a pointy-eared brunette walk the streets of Buda on his computer screens.

A new POV we get to see is from Gideon. He is the most misunderstood Lord because he can't say what he really means to say, being possessed by Lies. But in his POV we get to see his true thoughts since he "never lies to himself." I thought it was interesting that while Gideon was thinking about the other demons and what they could do compare to him, that he felt a longing when thinking of Nightmares that he couldn't explain. It'll be interesting to see what happens with that.

I enjoyed the guest appearance from Nix of the Immortal After Dark series by Kresley Cole. Her appearance is small and she doesn't say anything, but there are hints that Nix might be Torin's special lady. I don't know how that would work out, but Torin is the next Lord on my "Most Intriguing" list--I mean, he can't touch anyone at all--so I'd love to read his story.

There is a surprise revelation about Galen, keeper of Hope, toward the end that really threw the Lord for a loop. This series just keeps getting better and better with each new installment. I can't wait to read Aeron's story in The Darkest Passion.