Tour Review: She Speaks to Angels by Ami Blackwelder (Promo+Giveaway) 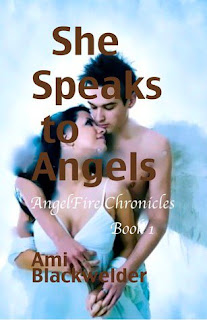 Summary: "I tried not to sound hysterical, but it's not every day you find out the paranormal is hunting you."

What if everything you believed was a lie?

Seventeen-year-old Allison Maney attends Millennium High School in Manhattan. Nothing out-of-the-ordinary, unless you consider the occasional suicides at the school. At least that is what everyone is told, what everyone believes. But Tommy Bachelor was a popular football player, why would he jump off the roof of the school?

When Dameon pays attention to Ali, she couldn't be more excited, because for the past three months he was all she could think about. But now that Dameon is finally pining for her affections, she is becoming more and more wrapped up in a clique-of-three, who as new transfers to the school are proving to be trouble. But at least Dameon loves her, doesn't he?

Kian--a dangerous love interest she did not ask for.
Powers--belonging to an underworld she never knew existed.
A Clique--that could be friends or foes?

The underworld of angels and demons have one thing on their minds--Earth.

Demons want to do what they want.

Angels want to protect humans from these rogue angels, AKA: Demons.

For Allison Maney, everything is not exactly what it seems...

Caught between Dameon and Kian, the suicide and the clique-of-three, Ali won't know who to trust...or who to love.

There are many books out there with battles between angels and demons, good and evil; but She Speaks to Angels has elements I've never read in another book of its kind. Ami Blackwelder takes real life issues ans combines them with the supernatural to create a tale of gripping survival, intense romance, and puzzling mystery.

Ali's world changed abruptly when Tommy Bachelor jumped from the roof of her high school. But why would a popular football player kill himself? Ali believes that there's more to the incident than meets the eye and starts her own investigation into the suicide. What she finds is unbelievable. Angels in Manhattan? Yep, but they aren't the only ones taking up residence in the city. The demons, or Dark Angels, are also in town, and they want Ali dead. Why do they want her dead? Because she found out their secret and they are losing their power and the only way to get it back is by killing her. But the angels, or AngelFire, will do anything to protect her.

Ali doesn't know who she can trust. Dameon, the guy she's been crushing on since he transferred the Millennium High and is finally showing interest in her? Or the three new transfer students--Kian, Krysta, and Nathaniel--who warn Ali away from Dameon? What she does know is that none of them are what they seem and all of them are hiding something.

One of the unique things I really liked about She Speaks to Angels is the rules that the angels and demons are to live by. The AngelFire are pretty serious about keeping them, but the Dark Angels gain new, not necessarily stronger, powers by breaking them; such as fur or fangs. Breaking the rules results in loss of essence, loss of wings, and loss of gifts. One of the rules that Kian and Ali have grievance with is the one that states that there can be no intimacy with humans, otherwise there's a loss of wing power. This makes for some pretty intense moments between Ali and Kian when they do allow some small amount of physical contact.

I like that Ali didn't fall in love with Kian right away. She was so blinded by Dameon in the beginning that she never really saw Kian until it was almost too late. When she did finally see Kian, she realized her mistake in choosing Dameon over Kian. The fact that there can be little to no physical intimacy between them proves that their feelings are from the heart and not hormones. Because of the no intimacy rule, their relationship has an intensity that's purely emotional. I thought that the moments when Kian touches Ali with his ethereal form was very powerful, because it's the only way for them to really be able to touch without Kian losing his wing power.

The beginnings of Dameon and Sammael's plan for making an army of Fanged and Were demons to fight the AngelFire are revealed in She Speaks to Angels. With losses and gains at the end of this book, it will be interesting to see how these changes impact future events. 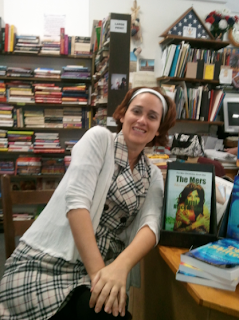 Ami Blackwelder is a romance suspense writer in the paranormal, scifi and historical genres. Growing up in Florida, she graduated UCF and in 1997 received her BA in English and additional teaching credentials. Then she packed her bags and travelled overseas to teach in Thailand, Nepal, Tibet, China and Korea. Thailand is considered her second home now. She has always loved writing and wrote poems and short stores since childhood; however, her novels began when she was in Thailand.

Ignorance
“Ignorance is bliss,” Molly replied at the park picnic park table. “Better if we don’t push our noses into someone else’s business.”
I fidgeted with my galoshes until I finally curled one leg under the other. “Tommy died for a reason. Doesn’t that reason bother you?” A gust of wind blew past and tousled my hair.
“How would we ever know the reasons? We can’t read his mind,” Molly retorted as she fixed her favorite avocado-colored scarf, which draped on her neck, a scarf that accented the green in her irises.
Sniffling, Jennifer desperately wanted to join the conversation, but couldn’t speak without shaking and bawling. She tended to her wool mittens instead. Red-eyed and disheveled, she reminded me of an old rag doll. Dressed in heavy beige coats, knit hats and boots, the three of us stayed relatively warm in the 30 degree weather. We were well acclimated, since we were all born and raised in New City.
“There has to be something we can find. He was popular for heaven’s sake, ” I insisted as Molly stared at me incredulously. “Girls loved him. Teachers adored him. Doesn’t make any sense.” I shook my head.
“Why? His best friends don’t even know why. Why does anyone do it?” Molly plopped her hand down on the picnic table, the hand holding the fanning paint brush. Dabbing her ocean blue canvas with specs of white, she created a snowy effect. “Maybe he just couldn’t take the pressure of being popular anymore.” When she rolled her eyes, I knew what Molly was thinking. She didn’t like the so-called jocks. Suicide or not, she didn’t want to give them any more of her time. But I didn’t want to let it go, couldn’t let it go. Something about it nagged me.
“Because...people just don’t go killing themselves for no good reason.”
“If you care so much, maybe you should write something up for the school paper.” Molly tilted her head to me and I lit up like a neon light. “You know...like one of those in-memory pieces.”
Brilliant! I hadn’t even thought of it, but I did have journalism fifth period. I could satiate my persistent curiosity and complete an assignment all in one. Every writer needed a muse and Tommy would be mine. A muse from the grave.
“We could work on it together...like Bonnie and Clyde.” I grinned as a snowflake dropped from the pines above and lit my long lashes.
Tightening the hug-grip around her chest, Jennifer sniffed one last time before raising her gaze.
“Wait, wait, wait...first of all Clyde was a guy,” Molly interjected, “and I’m not going to be the guy in this scenario. More like Rizzoli and Isles. And second, I am n-o-t going to be a part of this.”
“Why not? Could be intriguing. Today is Wednesday and we don’t have to be back at school until Monday. What else are we going to do?” I rationalized.
“I’ll do it.” Jennifer interrupted, the sound of her voice almost foreign at this point in the conversation. We both jerked our heads in her direction. Wiping her nose with the back of her coat sleeve she held a sneeze and repeated more firmly. “I’ll do it.” Her big brown eyes widened as her lips tensed.
“You will? why?” Molly cocked a brow and spun her body around on the bench to face Jennifer better. Her fingers inched across the table and found Jennifer’s mittened hands. “You don’t have to do this just because...” she didn’t want to say it aloud, but Molly had a way about her. Truth, whether crass or not, always popped out of her uncontrolled mouth. “...you liked him.”
Blushing, Jennifer tilted back and the freckles on her cheeks almost faded away. “I am going to do this because Ali is right. Tommy was not the sort to commit suicide. He had everything going for him. With his death this makes...” she paused in thought counting on her fingers, recollecting the names listed in the morning paper, “five deaths from Millennium High in seven years!”
“Don’t forget Emily.” I reminded them, and they each gave me wrinkled foreheads of confusion. “The girl who was found dead in Central Park. She went to the school too...and just because she didn’t die on school grounds doesn’t make her death any less odd.”
“Something is going on at this school and I’ll be damned if I’m just going to sit and do nothing.” Jennifer got her mojo back, a newfound task of investigation motivating her out of her misery.
“Well damn, if you two are going to go at this then...” Molly raked her fingers through her shoulder length cut and sighed, “then I might as well do it too.”
Jennifer and I both turned at the same time and grinned.
“What else am I going to do until Monday without the two of you?” Molly reasoned.
“It’s settled then. We are officially the unofficial team investigating this suicide,” I added as another gust of wind brushed through the park, rushing over Molly and Jennifer. 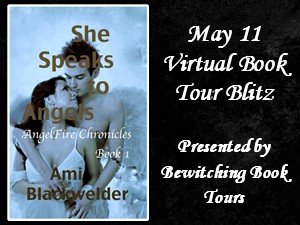