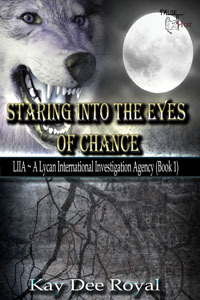 Tagline(s): Olivia swears off men until she meets Chance, a Lycan alpha. He ignites an undeniable hunger they can only sate together.

Summary: Olivia endures a thirty-four year passionless marriage, discovering her dead husband’s philandering history at his funeral. She devotes her energy and life-long sensitivity with animals to her wildlife refuge and preserve.

Chance, a Lycan alpha and leader of the Lycan International Investigation Agency (LIIA) throws himself into his investigations. He chooses to neglect his duty of finding a primal-mate after watching his father become an empty shell over the loss of his.

Will they succumb to its enticing tether, or fight to resume their loveless lives apart?

When one man and one woman, both unwilling to risk the pain of falling in love meet, they feel an undeniable connection. They need to search their hearts and decide if what they are feeling is worth taking a chance on. Staring Into the Eyes of Chance brings us the story of Chance and Olivia and the lengths they'll go to to protect what matters.

Olivia suffered through thirty-four years in a marriage with a man who didn't love her and cheated on her the whole time until he died. Chance witnessed the effects of losing a primal mate when his father lost his mother during childbirth, and he doesn't want any part of that pain. Chance and Olivia meet while Chance and his pack are tracking a rogue pack through Olivia's wildlife preserve. Sparks fly and a bond is formed. But when the one your destined to be with is threatened, what will you sacrifice to protect that special someone?

I really liked how Olivia and Chance's relationship developed. The attraction was instant, but they didn't fall in love right away. Olivia has trust issues after learning of her dead husband's cheating, and Chance has given up finding his primal mate to avoid the pain potentially losing her would cause. Each has their issues with falling in love and it takes them a while to become comfortable with each other. But when they finally decide to take that chance, they discover a love and passion, trust and loyalty that cannot be broken.

Their primal mate bond is really tested during and after the rogue pack alpha captured Olivia. Smoke is one of the most vile and disgusting bad guys I've ever read about. Not only did he kidnap, sexually assault, and drug Olivia and her best friend, Lindsey, he also marked Lindsey, effectively making her his mate and stealing her from Trevor, who Lindsey is the primal mate of and loves very much. That is one of the worst things that can happen to primal mates, being mated to someone else. There is also question about whether he is Chance's long-lost, and supposedly dead, older brother, Savage. Kay Dee Royal has created a bad guy of the top tier, ans though I found Smoke repulsive, he works really well for the villain of this book.

The ending of the book leaves a lot of questions left unanswered, but it does end on a somewhat happy note. I can't wait to read the next adventure in this series.


Staring Into the Eyes of Chance ~ Humans can have PN abilities, too.

Thank you, A Bibliophile’s Thoughts on Books, for having me today. I’ve been enjoying all the different blogs on my tour and look forward to spending time here.

My muse enjoys being taken away by strong, intelligent, confident heroines and rescued by wild, rugged, beastly heroes, both of which harbor shadowy secrets of intrigue and fun. My muse lives for the escape (LOL), imagine that.

With that in mind, besides telling the tales of paranormal beings, there are also humans with paranormal abilities…like Olivia. She’s a fifty-five year old widow of a philandering husband (for the entire thirty-four years of their marriage) and has never had children.

Olivia began at an early age ‘reading’ animals…any wildlife or domesticated animal. She never realized everyone couldn’t do what she did—knowing what the little OR big creatures were thinking. In her very early years, she didn’t know how she knew an animal’s mood, but she had the ability to calm them and understand their wants and needs.

As she grew older, certain kids bullied her…until she hid her gift/talent. Not until she was in her early twenty’s, did she come out of the closet to a close friend…not even her sister, Lacey knows about Olivia’s psychic ability with wildlife.

It was one of my favorite scenes to write. And, the Lycan had no clue she could ‘read’ them…even better.

So, what paranormal abilities would you like a human heroine to possess?

Olivia closed her eyes, calling up her animal sensitivity ability, while shoving down her own panic. After years of psychically working with animals, she knew they sensed panic and fear. Her breathing needed regulating.
Olivia relaxed as best she could and opened her mind. She sensed the wolf; masculine. He came across with an urgent need to protect, more like helping her feel safe. Another howl, with a deep and sinister timbre, shattered her concentration. A stab of electricity zipped through her, pumping adrenaline and tightening every muscle. This howl came from farther inside the forest than the first one. She sensed aggression in the wolves within the forest, ready for battle. Her heart drummed against her ribs in anticipation of an answering call, and she couldn’t stop the tremors running rampant in her belly.
Instead she saw the lights go out through her closed eyelids. She opened her eyes and saw nothing but blackness.
Nine o’clock on a September evening, what did she expect? Damn power company! Hopefully Lacey sat in the Jacuzzi and wouldn’t come running out.
She lay listening for any sound. Her own breath, the loudest panting she’d ever heard, came in at a close second to her heart banging against the walls of her chest. Slowly, she sat up. The back of her head throbbed, her spine hurt, and the front of her body ached, especially her breasts. She bent her legs to stand and in that same moment a jet of hot mist coated her face.
Wolf breath.
Olivia froze, tamping down the run-for-your-life urge. Her mind reached toward the beast beside her, searching his energy markers, his emotions, urges. She read him as curious, stimulated. Maybe a misread of…sexually stimulated? She sat back on her haunches, figuring if she stretched at least four feet of her five-foot ten frame, maybe she’d appear larger. His breath assailed her from above, she remained squatted.
Damn, this thing is huge!
He sniffed the top of her head, down by her ear, licked the length of her neck and up the side of her face. Another howl close by, echoing near the tree-line, got the wolf’s attention. He raised his head from her and shoved her body back with his own. She went down on her butt, folding her legs sideways. Fur from his backside pressed into the front of her, including her face. Olivia turned her head away and took a breath. A shiver began in her belly and inched through her arms, legs, and up her neck. She sensed his urgency, he must move and his need…again, to keep her safe and again something else, another misread?
He moved back, his head next to hers. A growl vibrated, harsh and deep, beside her ear. Olivia jumped when he yipped instead of howled. He circled her, stopping behind her. A sudden scratch of claws and pebbles from rain washout near the barn pelted her. Air swirled around her as the wolf leaped over her head in the direction of the woods.
Olivia’s breath whooshed out like a balloon being released. Tears welled and trickled down her face. The wolf’s size was about as abnormal as it got. She’d never heard of any wolf being that large. She’d done plenty of research on the species, brushing up for the wolf pup she rehabilitated and released back into the wild years ago when Ray and she first opened the refuge, before they owned the preserve property.
Olivia pushed herself up onto wobbly legs, her stomach lurched, and before she could blink, vomit spewed. She retched hard, falling onto her hands and knees, weak and crying, something she hadn’t done since Ray’s funeral. As if on cue, all the lights popped on, illuminating her shadow against the barn wall.
Oh, that’s lovely. Damn power company.
A howl, and then another and another, echoed from different locations in the forest. Her forest, her wildlife preserve, not a place for a beast like her visitor, and most definitely not a place for the aggressive lot in the forest. She swiped her face with the bottom of her shirt and looked toward the woods.
About thirty yards away in the mowed meadow, her wolf circled with another, close-in-size, milky-eyed wolf with a deformed face, both spot-lighted in the yard light. They flashed razor sharp teeth and glowing eyes, with the exception of the one’s coated eye. Their vicious growls and snapping jaws filled the air. Olivia found her tranq gun on the ground and grabbed it. By the time she turned for a shot, she saw the tail end of both wolves leaping into the woods, her wolf chasing the other.
Olivia leaned against the barn, adjusting her position in accordance with her pain. She thought of the curious readings she sensed from her wolf, not sure of their meaning. She never questioned first impressions from readings anymore. Years of experiences proved first intuitive readings rang as authentic truth in almost every case.
She closed her eyes and pictured her wolf looking at her for the first time, the way his head snapped in her direction and how their gazes met and connected. She touched her neck, sliding fingertips up her cheek where his tongue touched her skin. Her breath caught, heart raced, and her eyes opened wide. She laughed out loud, maybe in relief, maybe in a small fit of hysteria, or maybe because she consider that wolf as “her” wolf. Her “stimulation” readings from him threw her off, knowing it wasn’t a possibility. 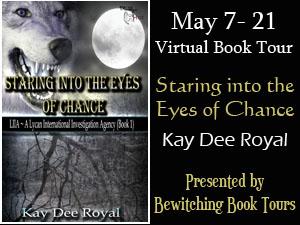