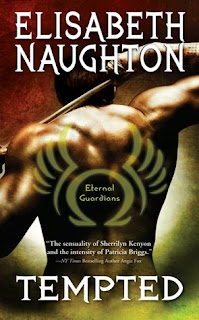 Tagline(s): DEMETRIUS--He's the hulking, brooding warrior even his fellow Guardians avoid. Too dark. Too damaged. And given his heritage, he knows it's best to keep everyone at arm's length.

Summary: Isadora is missing. The words pound through his head like a frantic drumbeat. For her own protection, Demetrius did all he could to avoid the fragile princess, his soul mate. And now she's gone--kidnapped. To get her back, he'll have to go to the black place in his soul he's always shunned.

As daemons ravage the human realm and his loyalty to the Guardians is put to the ultimate test, Demetrius realizes that Isadora is stronger than anyone thought. And finally letting her into his heart may be the only way to save them both.

Tempted is the third book in Elisabeth Naughton's Eternal Guardians series. We get to see behind the masks of Isadora and Demetrius, two of the most complicated characters in this series. Isadora finally comes into her own, and we learn why Demetrius is the way he is.

In Marked, Isadora was a shy princess who was easily pushed around. In Entwined, she realized that is she wants to change her world for the better, she needs to become stronger and grow a backbone. And finally in Tempted, we see Isadora become who she was always meant to be. She has found an inner strength that just shines though. She's not going to let anyone use her--especially not the Council.

I never really liked Isadora until I read Tempted. I don't like weak heroines, and that's exactly what she was until this book. But in Tempted, Isadora becomes stronger physically, mentally, and emotionally. She's going to make a great queen.

*Sigh* Demetrius. There is just something about a guy who has that tough, hard exterior, but the soft, caring center, that's irresistible. Like candy with a yummy, gooey center. Demetrius has a really dark past that has left it's scars. He's more than just the typical Argonaut, and the secrets of the past have come back to haunt him. He knows that Isadora is his soul mate and he will do anything to protect her. But before he can give himself completely to Isadora, Demetrius has to overcome the darkness inside himself and step back into the light.

I loved Demetrius from the very beginning of this series. But seeing his strength, his determination, his restraint, and his deep love for Isadora, made me love him even more.

On a side note from the main story, I was pleasantly surprised by Orpheus. His love and concern for both Isadora and his brother, Gryphon, was really touching. And I felt really bad for Nick, Demetrius's brother and the leader of the Misos, by the end of the book. I can't say much because of spoilers, but you'll know what I mean once you read it for yourself.

I loved this books and I can't wait to read Orpheus's story in Enraptured. 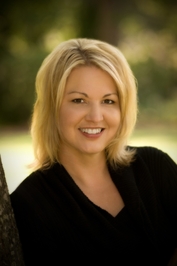 A former junior high science teacher, Elisabeth Naughton traded in her red pen and test tube set for a laptop and research books. She now writes sexy romantic adventure and paranormal novels full time from her home in western Oregon where she lives with her husband and three children. Her work has been nominated for numerous awards including the prestigious RITA® awards by Romance Writers of America, the Australian Romance Reader Awards, The Golden Leaf and the Golden Heart. When not writing, Elisabeth can be found running, hanging out at the ballpark or dreaming up new and exciting adventures. Visit her at www.elisabethnaughton.com to learn more about her and her books.

Tempted is the fourth book I've read for the Mythology Romance Reading Challenge hosted by Reading Between the Wines Book Club.
Posted by Christina @ Biblio Thoughts at 5:04 PM