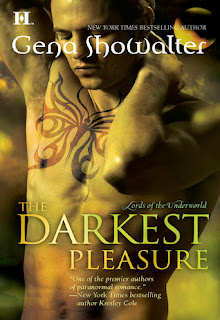 Tagline(s): He can bear any pain but the thought of losing her...

Summary: Reyes is a man possessed. Bound by the demon of pain, he is forbidden to know pleasure. Yet he craves a mortal woman, Danika Ford, more than breath and will do anything to claim her--even defy the gods.

Danika is on the run. For months she's eluded the Lords of the Underworld, immortal warriors who won't rest until she and her family have been destroyed. But her dreams are haunted by Reyes, the warrior whose searing touch she can't forget. Yet a future together could mean death to all they both hold dear....

In The Darkest Pleasure, unlike in the first two books in the Lords of the Underworld series, we get to read the story from, not only the main characters Danika and Reyes's POV, but also the POVs of Paris, Sabin, and Aeron. Each has their own pain to work through. Some are able to overcome that pain and find happiness and some aren't.

Reyes's demon is Pain. His demon urges him to cause pain. When Reyes came out of his demon haze all those years ago, he discovered that he could satisfy the demon's need for pain by inflicting it upon himself. A life ruled by pain rarely, if ever, offers a chance for pleasure. But when Reyes meets Danika, she enhances his pain but also gives him the greatest pleasure. All Reyes needs to worry about is not whether she'll accept him as who ans what he is, but what will happen to her once she does. Pain has changed all of the women Reyes has ever been with and he doesn't wish that upon Danika.

(SPOILERS) And Danika has her own problems to deal with. It is discovered that she is the All-Seeing Eye, one of the artifacts the Lords are searching for. It runs through her family bloodline, and that is the reason Cronus ordered the death of her and her family. That way no one would be able to use her against him. When Aeron asked her what she sees of the heavens and the underworld, this is how she described it:


"I see great evil and unerring goodness. I see death and life. Darkness and rainbow colors. Demonlike creatures who destroy, screams all around them. Angels who repair the damage, songs of glory humming from their wings."

It's hard to imagine dreaming of these things; whether terrifying or peaceful, it's got to be a huge burden to carry. I can understand why she would work through it by painting what she has seen, to "purge" it from herself.

Another revelation is actually discovered through one of Danika's dream-vision paintings. Galen, keeper of Hope, is leading the Hunters! Who would have thought that Hope was a demon? And it turns out that he's probably the worst demon out of all the Lords. Hope is a demon who purposely raises expectations, only to crush them, leaving nothing but despair in it's wake. And the man is no better. Galen is two-faced and a master of deception. He will easily pretend to be a friend to your face, but once your back is turned he has no problem stabbing it. Where Aeron's demon, Wrath, has black wings; Galen's demon, Hope, has snow-white wings like those of an angel. This helps Galen deceive the Hunters into believing that he's been sent from Heaven to help them rid the world of the Lords, and in turn use the Hunters for his own devices without them even realizing. He was also the one to convince the warriors to go after Pandora's Box in the first place. He is the ultimate cause of all the Lord's torment. To think that the greatest evil in the world is actually Hope. It's mind-boggling.

Lastly, I just wanted to say that Paris's POV was really moving. He's lamenting Sienna's death. He doesn't know whether to blame himself, the Hunters, or the gods, but he wants someone to pay for him losing her. He ultimately chooses to beseech the gods, Cronus to be exact, to bring her back to him. But like all deals with the gods, there's always a catch. Cronus, in the end, makes Paris choose between Sienna and Aeron. If he chooses Sienna, Cronus will give her to Paris just as she was before her death. If he chooses Aeron, Cronus will relieve Aeron of the blood lust curse. I'll leave you to find out who Paris chose, but I'll say that the choice is one that completely tore Paris apart. When I first started the Lords of the Underworld series, I was most intrigued by Lucien and Reyes and was dying to know more about them, but after reading The Darkest Pleasure Paris has become the most intriguing character and I desperately want to know if he'll ever be rid of the torment he went through in this book and find happiness.

The Darkest Pleasure is the third book I've read for the Mythology Romance Reading Challenge hosted by Reading Between the Wines Book Club.
Posted by Christina @ Biblio Thoughts at 3:22 PM