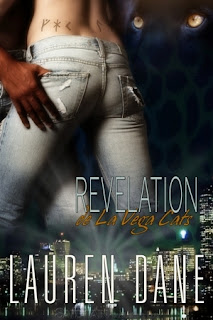 Tagline(s): He has the one thing she never thought she deserved. A place to belong...

Summary: At long last, Kendra Kellogg has found her sister--but she's no closer to filling the gaps in her past. The magick that brought them together makes them targets for dark mages intent on finishing what started with their mother's murder.

As if her life wasn't chaotic enough, in barrels the one thing she doesn't expect, Max de La Vega. He's six-and-a-half-feet of cocoa-brown alpha male. He's strong, intelligent, sexy and intense. Everything she'd wanted in a man. And he scares the hell out of her. Still healing from a disastrous past relationship, she wonders if she'll ever have that kind of forever.

The next in line to run his jaguar jamboree, Max is unused to hearing "no". Once he knows what he wants, he assumes he'll get it. And he wants Kendra. She deserves happiness and it's his mission to give it to her.

When dark mages attempt to steal her magickal energy, Max's cat agrees with the man--Kendra is his to protect and he will stop at nothing to keep her safe. She can push him away as hard as she likes, he's not going anywhere.

As Kendra finds a place to belong and Max finds his other half, a plot against all paranormals is uncovered and no one is safe.

In Trinity, Lauren Dane introduced us to the Kellogg sisters and the de La Vega jaguar jamboree. It was also the beginning of a very dangerous and deadly situation that little was known about. In Revelation, as the title suggests, everything is revealed.

Trinity ended with Renee, Kendra's sister, dreaming about her past and her mother's death. Revelation picks up right from there with Kendra rushing to Renee's place after getting an urgent call asking her to come over. With Renee's memories returning, Kendra's suspicions of their father's involvement in their mother's murder are confirmed. As the search for their father and stepmother continues, Kendra gains the attention of Max de La Vega, the next-in-line alpha of his jamboree.

Amidst death threats and attacks from the mages intent on draining Kendra and her sister of their power, Kendra tries to make a place for herself in this new city and quickly finds where she belongs--with Max de La Vega as his wife and fellow alpha. Max knew Kendra was the one when he first laid eyes on her. Not only is she strong and powerful, but she's compassionate and values family. She's his equal in every way and has the ability to lead at his side.

What I love about Kendra and Max is that you can tell how much they love each other, but they don't let it overshadow what's important. They don't become completely consumed with each other to the point where they can only see themselves. They are leaders and have responsibilities, and they take that very seriously.

I like that more import is put on the story than on the romance. In a lot of paranormal romances, it's all about the romance and the rest of the story is pretty thin. With Revelation, and the de La Vega series in general, the romance and story balance each other out perfectly.

Lauren Dane knows how to write a well balanced and enjoyable story--a dangerous and suspenseful story with passionate romance. I can't wait for the next installment in the de La Vega Cats series! 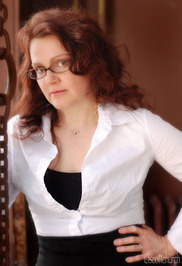 Lauren Dane has been writing stories since she was able to use a pencil, and before that she used to tell them to people. Of course, she still talks nonstop, and through wonderful fate and good fortune, she’s now able to share what she writes with others. It’s a wonderful life!

The basics: Lauren is a mom, a partner, a best friend and a daughter. Living in the rainy but beautiful Pacific Northwest, she spends her late evenings writing like a fiend when she finally wrestles all of her kids to bed.
Posted by Christina @ Biblio Thoughts at 4:07 PM