Review: Jessica Rules the Dark Side by Beth Fantaskey 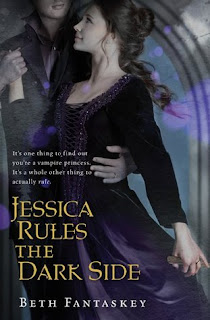 Tagline(s): It's one thing to find out you're a vampire princess. It's a whole other thing to actually rule.

Summary: When Jessica Packwood found out she was a Romanian vampire princess, she had the shock of her teenage life. Turns out that was the easy part.

Now, married to Prince Lucius Vladescu, she has to claim her throne and convince a vampire nation she's fit to be their queen. But Jess can't even order a decent meal from her castle's Romanian staff, let alone deal with devious undead subjects who would love to see her fail.

And when Lucius is accused of murdering a vampire Elder and imprisoned without the blood he needs, Jessica finds herself alone, fighting for both their survivals.

Desperate to clear her husband's name and win his release, Jess enlists the help of her best friend, Mindy Stankowicz, and Lucius's mysterious Italian cousin, Raniero Lovatu. But both of them are keeping some dark secrets. Can Jess figure out who to trust--and how to rise to power--before she loses everything, including the vampire she loves?

Full of romance, mystery, and danger, the highly anticipated sequel to Jessica's Guide to Dating on the Dark Side shows that sometimes a princess has to earn her "happily ever after"--with a sharpened stake in hand.

Jessica Rules the Dark Side is the much anticipated sequel to Jessica's Guide to Dating on the Dark Side. Beth Fantaskey shows us Jessica's struggle to become and want to be royalty as she tries to free Lucius from a crime he didn't commit.

Some readers didn't like that the easy banter and jokes from Jessica's Guide weren't mirrored in Rules the Dark Side, but this sequel's story is more serious than it's predecessor and I was glad that the dialogue matched that. You can't be joking in a serious situation. Rules the Dark Side shows how Jessica, Lucius, and company had to grow up and become responsible adults.

I was amazed by Jessica in this book. Though in the beginning she's kind of weak, lazy, and royally unfit; when it comes time for her to step up and stand on her own two feet, Jessica shows the strength, power, and resilience befitting a queen. As Jess struggles to find evidence that will clear Lucius's name, Raniero helps her realize that she didn't have the drive or the want to rule. Once she realized this, it gave her the motivation she needed to claim what was rightfully hers.

I think my favorite part of the entire book was when Jess came charging into the courtroom wearing jeans and a t-shirt; marches right over to the one responsible and gives it to 'em. That is the first glimpse we have of Jess as the queen she will eventually be. And everyone in that courtroom knew it. It's the moment when the Jess from Pennsylvania and Princess Antanasia become one.

Other enjoyable things about Rules the Dark Side are the alternating POV's (I love the different views of the story and events), Mindy and Raniero's complicated relationship, the emails between Lucius and Raniero (we get more insight into Lucius's thoughts), and the political power plays.

I loved how Jess and Lucius supported each other and how their love for each other just grows stronger as time goes by (who would have thought that the Lucius from Jessica's Guide could love like that?). I really hope this isn't the last that we see of Jessica and Lucius. Lucius and his secrets! I'm still really curious about what he was actually doing during the time the Elder was being destroyed. 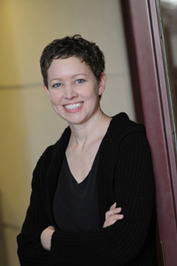 1. My favorite hobby is traveling the world - but my biggest fear is flying.

4. My weirdest work experience was helping to “tan” deer hides using cow brains. (I was actually writing a magazine story about it.)

5. I’ve only been fired once, from a job as a bookstore clerk.

6. My best educational experience was doing research in India on the Dalit (“untouchable”) struggle for human rights. (See maarpu.org)

7. My worst experience, ever, was getting food poisoning while riding my bike from the Missouri River to the Mississippi. (My friend told me the chicken tasted strange…)

8. Whenever I visit a new country, I try as many ketchups as I can. (Best: Poland, Worst: China)

9. I am an uncommonly bad volleyball player…ask the team that ALMOST won a championship.

10. I also suffer from mild “ichthyphobia,” or “fear or fish.” I don’t bother trying to overcome that one!
Posted by Christina @ Biblio Thoughts at 3:36 PM