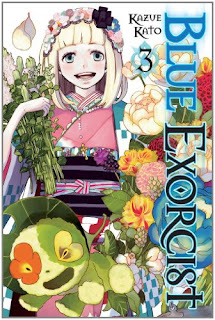 Summary: As a new exorcist Exwire at True Cross Academy, Rin Okumura has a long way to go before he reaches the top rank of Paladin. When Rin and his classmates are sent to search for a ghost, Amaimon, King of Earth, takes Rin by surprise and steals the Koma Sword. Higher powers have been observing events at the academy and make their presence known. New players enter the game, and Rin doesn't even know he's playing!

In Volume 3, Rin gains a familiar when Kuro, Father Fujimoto's familiar, goes crazy with grief over his death and Rin's the only on who can calm him down. While Rin is going about day to day life, Mephisto is behind the scenes plotting how to rile Rin up. His plan is still vague, but he has Amaimon attack Rin and steal the Koma Sword. This is when we meet Shura, Father Fujimoto's apprentice. Her mission is to uncover dangerous elements at the Japan branch and eliminate anything connected to Satan--and that includes Rin. After making a deal with Shura, Rin realizes that he's losing control just as he did when he was younger. This realization kick starts his determination to gain more control. Spring Break brings the Forest Camp for the Exwires. Rin experiences for the first time what it's like to have friends. But when their first training mission in the pitch dark forest occurs, Rin is forced to use his flame to save Shiemi from the demon moths attacking her. What happens when one of the class sees the bright flash of Rin's flame?

I thought Kuro was really cute. Even though he's a demon cat, he loves humans and quickly grows attached to Rin. The guy's reaction to Shiemi when she arrives in a school uniform instead of her usual kimono is so funny--especially Yukio and Rin. I thought Rin was pretty awesome when he was fighting Amaimon at the amusement park. Even though he was losing control, he was able to snap out of it long enough to save Shiemi when she was in danger. Shura is a kick-butt exorcist and an amazing swords woman. She's able to light a fire in Rin to become the best exorcist around. Rin's happiness at experiencing what it's like to have friends for the first time was a heartwarming moment, but it's threatened when Suguro sees the flash of Rin's flame during their training mission.

This is the volume when Rin's secret is threatened and higher powers are closing in on him. Will Rin's new friends stand by this side or abandon him to his fate when he'll need them most?

Kazue Katō (加藤和恵, Katō Kazue), born on July 20th, 1980 in the district of Shinjuku, in Tokyo, is a Japanese mangaka, author of shōnen manga. She is mainly known to be author of Blue Exorcist. She also created Robot to Usakichi ( ロボとうさ吉 ), for which she received the price Osamu Tezuka Award.
Posted by Christina @ Biblio Thoughts at 3:36 PM