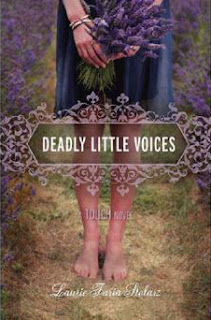 Summary: Camelia Hammond thought her powers of psychometry gave her only the ability to sense the future through touch. But now she has started to hear voices. Cruel voices. Berating her, telling her how ugly she is, that she has no talent, and that she'd be better off dead. Camelia is terrified for her mental stability, especially since her deranged aunt has just moved into the house. As if all of that weren't torturing enough, Camelia's ex-boyfriend, Ben, who has similar psychometric abilities, has started seeing someone else. Even her closest friends, Kimmie and Wes, are not sure how to handle her erratic behavior.

With the line between reality and dream consistently blurred, Camelia turns to pottery to get a grip on her emotions. She begins sculpting a figure skater, only to receive frightening premonitions that someone's in danger. But who is the intended victim? And how can Camelia help that person when she is on the brink of losing her own sanity?

In Deadly Little Voices, Camelia's psychometric powers are stronger than ever and the voices that come with this latest premonition are mean and malicious. As Camelia struggles to differentiate what's real and what's not, she feels her sanity slipping and all the while someone is in serious danger. Camelia must find who she can trust to help her before it's too late--for herself and the girl in trouble.

Laurie Faria Stolarz's Touch series has a creepy factor to it's suspenseful story, and she doesn't disappoint with Deadly Little Voices. If anything, I'd say she upped the creepiness. Not only are the voices and visions scarier, but in this book, there's a sort of theme with Jack and Jill. There are two people--the victim and the victimizer--who write letters or diary entries telling their parts of the story and signing them Jack and Jill. Also, the victimizer sings these rhymes that he's made up to the Jack and Jill tune, which like I said is creepy, but not unusual for a psychopath.

(Possible spoilers in the next paragraph.)

When it comes to Camelia and Ben, I have to say that I'm kind of glad that they broke it off. Camelia deserves someone who will make her happy and she's just not getting much of that from Ben. Although, Ben's moment with Camelia--she's unconscious--that we see through the last diary entry of "Jill's," when he takes Camelia's hand and places it over the tattoo on his thigh and swears to love her forever, is really sweet. The only problems are that Camelia was unconscious, Ben lets Adam take credit for the rescue and then walks out of her life again. I'm glad that, in the end,Camelia choose to be happy with Adam.

"You're just one big, fat joke," the voice hisses. The words echo inside my brain.

I cover my ears, but still the insults keep coming. And suddenly I'm six years old again with my doll clenched against my chest and a throbbing sensation at the back of my head.

I look toward my parents' closed bedroom door, feeling my stomach churn. I reach out to open their door, but I can't seem to find it now. There's a swirl of color behind my eyes, making me dizzy. I take another step, holding the wall to steady myself; the floor feels like it's tilting beneath my feet.

On hands and knees now, I close my eyes to ease the ache in my head.

"Just do it," the voice whispers. It's followed by more voices, of different people. All trapped insides my head. The voices talk over one another and mingle together, producing one clear-cut message: that I'm a waste of a life. Finally, I find the knob and pull the door open, but my palms brush against a wad of fabric, and I realize that I haven't found my parents' bedroom after all.

It's the hallway closet. A flannel sheet tumbles onto my face.

Instead of turning away, I crawl inside, and remain crouched on the floor, praying for the voices to stop.

But they only seem to get louder.

I rock back and forth, trying to remain in control. I smother my ears with the sheets. Press my forehead against my knees. Pound my heels into the floor, bracing myself for whatever's coming next.

Meanwhile, there's a drilling sensation inside my head; it pushes through the bone of my skull and makes me feel like I'm going crazy.

"Please," I whisper. More tears sting my eyes. I shake my head, wondering if maybe I'm already dead, if maybe the voices are part of hell.

Laurie Faria Stolarz grew up in Salem, MA, attended Merrimack College, and received an MFA in Creative Writing from Emerson College in Boston.

Laurie Faria Stolarz is an American author of young adult fiction novels, best known for her Blue is for Nightmares series. Her works, which feature teenage protagonists, blend elements found in mystery and romance novels.

StolarzBIFN" series have sold over 500,000 copies collectively.Stolarz has also announced a graphic novel entry into the series titled Black is for Beginnings, which she published in summer 2009.
Posted by Christina @ Biblio Thoughts at 4:09 PM