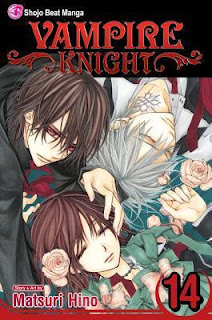 Summary: The Vampire Hunter Society has imprisoned Aido in order to interrogate him about Kaname's connection to Sara Shirabuki. Meanwhile, Yuki wants a fresh start with Kaname, but circumstances arise that may force them apart.

This is one of the most shocking volumes in the Vampire Knight series so far. We see more of the past and the connection between the progenitors and the hunters. The lines between who is more inhumane have become blurred. Zero is still struggling with his feelings toward Yuki now that she's the Kuran princess. Sara is using a pharmaceutical company for something really bad in her pursuit to become Queen. But the most shocking of all that happens in this volume is Kaname killing Lord Aido and leaving Yuki.

I can't even guess what is going on in Kaname's head. He waited 10 years for Yuki and now he leaves her?! It makes no sense! Yuki is left confused and heartbroken, and in her desperation to follow Kaname, she sprouts butterfly wings of blood. When I watched the anime, I always wondered about the blood butterfly wings shown in the opening, and now I know where they come from. The wings are a symbol of her confusion, her heartbreak, and her desperation to follow Kaname, as if she could fly to him.

"The let's all devour one another until only one remains. To us, who have infinite time on our hands as purebloods, this is merely a game." 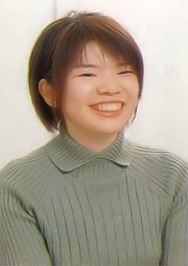 Matsuri Hino was born on January 24 in Hokkaido. She was a bookshop keeper who one day decided to become a manga artist, and all of nine months later, in 1995, she published her first manga title, Kono Yume ga Sametara (When This Dream Is Over), in Japan's LaLa DX magazine.
Posted by Christina @ Biblio Thoughts at 6:23 PM