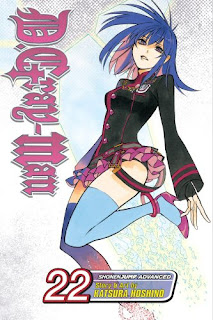 Summary: Struggling with mounting turmoil over his own identity, Allen meets The Cardinal. Who is he? What is he? Why is he interested in Allen? The answers are startling, and arrive with a vision that shocks the young demon fighter to the core!

After Yu and Alma's deadly battle, Allen sends them to a place where no one will ever be able to harm them again...

As an Akuma, Alma can sense the Allen is a Noah and sympathizes with Allen. This is a sure sign that Alma is coming to his senses, at least at the end. The last image of Yu and Alma is so heartbreaking. Their fate was such a sad one. Alma's sadness was as deep as his hatred.

When the Earl said that he wanted to be by the Fourteenth's side, it made some, if not all of the Noah jealous. The Noah captured Bookman and Lavi, because they want to know the Fourteenth's weaknesses in order to kill him, even though the Earl ordered them to protect him at all costs. The Noah can be pretty scary!

I feel so bad for Allen! He always seems to end up locked up somewhere. How many times has it been now? It's like no matter how Allen proves himself to the Order, because he has the Fourteenth inside him, they will never trust him.

Allen laments his ignorance about the things going on around him. Especially concerning the Fourteenth. He knows that the Fourteenth was Mana's younger brother, but he doesn't know why he betrayed the Noah and wanted to be the Millennium Earl. There are so many things about the Fourteenth that are still unknown. We finally know his name and what he looks like, but what were his motives?

"Love. Friendship. Sorrow. Despair. No one has a deeper or more tempestuous relationship with Innocence than you. You've grown into a splendid exorcist, Allen."

The Cardinal is SO CREEPY!! He wants to become one with Allen, whatever that means. In the process, Allen sees a disturbing vision involving the Cardinal and his master, Cross Marian. I knew the Earl wanted to protect Allen, but I didn't expect him to sense the Cardinal's attack on Allen and send a couple Noah (Road and Tyki) in to help. The Cardinal turns out to be something even more creepy than just being a weirdo. He's Apocryphos--an independent-type Innocence that exists to protect the Heart. He is the closest anyone has come to the Heart in 7,000 years. I'm telling you, all the talk about "becoming one" is just too weird and makes the Cardinal sound like a pervert. And I don't even want to know what would happen to Allen if that were done.

When Allen escapes the Cardinal and the prison cell he was held in, thanks to Link, he is declared to be considered a Noah and his status as an exorcist is suspended.

"You don't know what you are and you don't really care. You just spread confusion and conflict. You're the worst of us all, Allen Walker."

This turn of events brings about the time when Allen needs to go out on his own and really figure things out for himself. He may need to fight his friends in the future, but he has accepted that. His farewell with Lenalee is really sad, but Allen has an almost hopeful air about him. It'll be interesting to see where Allen ends up.

"Whatever happens, I'm an exorcist. Whatever road I may take, that won't change. The Order is where my heart is because of all the wonderful goofballs like you." 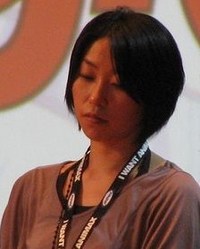 Katsura Hoshino ((星野 桂 Hoshino Katsura) was born on April 21, 1980, in Shiga Prefecture, Japan, as the younger of fraternal twin girls and the second of three children. She drew her first manga at twenty-one. In 1998, Hoshino moved to Tokyo. She dreamed of bringing her mother to the city and was able to in 2006.

She made her debut with her comics in July 2003 with the publication of her first manga series Continue and is known for her work, D.Gray-man, which began serialization in Shueisha's Weekly Shōnen Jump in May 2004.
Posted by Christina @ Biblio Thoughts at 12:23 PM