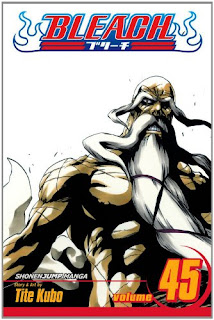 Tagline(s): Do not live bowing down.
Die standing up.

Summary: The great battle heads for a climax as Aizen joins the battlefield and faces the Soul Society's greatest captains. Captain General Yamamoto reveals his true powers for the first time, but will it be enough to stop Aizen?

You know, whenever someone introduces a new attack that hasn't been seen, you think "Oh wow, that'll do the trick." Shinji's Bankai seemed real mysterious, but of course it doesn't do much of anything against Aizen. It was really kind of pathetic, if you ask me.

Ichigo makes his big entrance into the battle at last! It was a great, dramatic entrance, but the attack, might I add SURPRISE attack, was blocked! What a wasted offensive strike!

When the captains and Visoreds make a stand to protect Ichigo so he might have his chance to attack Aizen and finish him, it was real bold and BAM! in your face, but totally deflated when they start falling one by one.

What is the difference between hate and duty? Swinging a sword for hatred is only violence, but swinging a sword for duty alone is what a captain does. Can you guess who made this statement? Well, it definitely sounds like something Hitsugaya would say. He takes his duty as Captain very seriously, but he also has a very short temper and he really hates Aizen for what he did to Hinamori.

When I first saw Captain General Yamamoto battle in the volumes when Ichigo and company invaded the Soul Society to save Rukia, I thought him incredibly strong and unbeatable. But in this volume in his fight against Aizen, he seemed incredibly weak in comparison. It was kind of disappointing.

With Yamamoto and the other captains down for the count, Ichigo enters the battle again as Aizen leaves the flames. But if Yamamoto, the strongest, most powerful Soul Reaper for a thousand years, couldn't even scratch Aizen, will Ichigo be able to defeat him?

His next series, Bleach, about a high school student who becomes a shinigami and fights hollows, was not such a failure. Bleach began regular publication in 2001. It has been running in Weekly Shonen Jump ever since.
Posted by Christina @ Biblio Thoughts at 1:06 PM