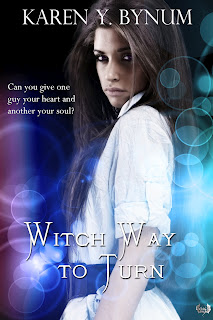 Tagline(s): Can you give one guy your heart and another your soul?

Summary: The last thing eighteen-year-old Breena Cross needs in her life is more complications. It’s all she can do to balance studying, working, trying to keep her foster-sister safe and drooling over the new guy at work. But things go from complicated to crazy when a fit of rage ignites the dark magic inside her and she finds herself fending off the supernatural underworld.

Myles, Breena’s drool-worthy coworker and vampire convict, is carrying a load of secrets--one of which is that he’s fang-over-lip in love with Breena and in danger of violating the terms of his sentence.

Orin is a soul-hungry assassin sent to kill Breena. However, he takes one look into her eyes and sees his own lost humanity. For once thinking of someone other than himself, he chooses not to end her life, even though it means risking his own.

Despite a convict and an assassin fighting over her, all Breena wants is custody of her sister. But to do this, she will need help from both Myles and Orin. And if Breena doesn’t learn to control the darkness within, she could lose her sister…forever.

“You Breena Cross?” The white guy closed the distance between them.

“The witch has attitude.” The black guy moved closer.

“Hey, who you calling a witch, ass?” She gripped her car key tight against her palm, ready to go for the eyes first.
It happened so fast, she didn’t even have a chance to use her makeshift weapon. The white guy pinned her against the car door and her keys fell to the ground.

“We got her,” the white guy said. His breath smelled like rotten hamburger.

She tried to push him off her, but he forced her even harder into the door handle.
“He’s gonna be real happy with us, Jay,” the white guy practically sang.

Breena wondered who “he” was, but only for a second, because the guy’s lips pulled back and she saw his teeth. They were flat but, somehow, they looked sharp.

Sharp? What the hell?

His gaze was a roaring fire of hunger. Predatory. It looked like he wanted to rip her throat out.

He made a low growl and pressed his lips to her neck. A sound like crazed bees buzzed in her ears, nearly deafening her. She didn’t know what to do. Her palms began to sweat and, for a moment, she thought the blue light would be her saving grace, but her hands only shook.

“Back away from her.” The man sounded calm enough, but his voice had an edge to it that meant business.

“You lookin’ to lose a fight?” Jay swiveled around.

He appeared out of nowhere, grabbed Breena’s attacker by the back of his shirt and threw him a good two or three parking spaces down the lot. The black guy froze in place.

Her savior’s ears sprang up through his hair into two sharp points.

The two guys got one good look at the pointed ears and hauled tail.

Breena didn’t blame them for running. She would’ve joined them if curiosity hadn’t got the better of her. Besides, it was hard to be too scared of someone who’d just saved your life and looked sexy as all get out. So what if he had weird-looking ears?
“What are you?” She fidgeted with the strap on her backpack, swallowing her nerves.

“I’m not sure. I’ve had very little experience with halflings.”

“You didn’t answer my question.” Halflings?

Annoyance chasing away the last remnants of fear, Breena let out a little huff. Was he trying to push her buttons?

He moved closer, his steps as graceful as flowing water. His eyes caught her attention immediately--a ghostly pale-green with a golden circle around each pupil. Standing by her side, he propped himself against the VW.

“Amazing,” he whispered, staring at her. His gaze was intense, and slightly bewildered, as if he were trying to solve a riddle.

Weird much? She shifted on her feet, eyeing the keys on the ground.

“Sorry. You must think I’m a crazy superhero-wannabe.” He shook his head and traced his finger along his open palm. “Your kind is so rare.” His eyes lit up as he smiled. He stooped to pick up the keys and handed them to her.

Breena snatched them and started backing away from the car as nonchalantly as possible. 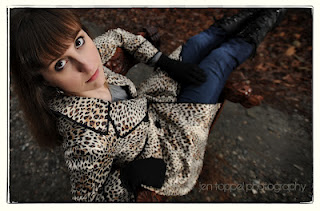 Karen Y. Bynum is an author of young adult paranormal fantasy. Her novel Witch Way to Turn is published through Lyrical Press. She grew up in Hickory, North Carolina where mountains and magic surrounded her. Even as a child, she wrote her own faery tales and prattled incessantly to her imaginary friends.

After graduating from UNC Charlotte with a Bachelor’s degree in Mass Media Communications, she went on to become certified in culinary arts from The Art Institute of Charlotte. But it wasn’t until her aerospace engineer husband accepted a job in Virginia and they relocated that she knew what she wanted to be when she grew up.

With the support of family and friends, Karen embarked on a journey with the voices in her head. They wouldn’t stop talking (yes, she does answer back) and their stories took shape. 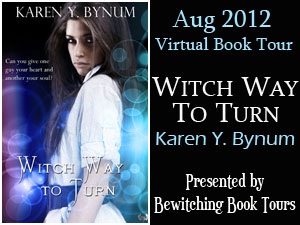