Ash, former prince of the Winter Court, gave up everything. His title, his home, even his vow of loyalty. All for a girl… and all for nothing.

Unless he can earn a soul.

To cold, emotionless faery prince Ash, love was a weakness for mortals and fools. His own love had died a horrible death, killing any gentler feelings the Winter prince might have had. Or so he thought.

Then Meghan Chase—a half human, half fey slip of a girl— smashed through his barricades, binding him to her irrevocably with his oath to be her knight. And when all of Faery nearly fell to the Iron fey, she severed their bond to save his life. Meghan is now the Iron Queen, ruler of a realm where no Winter or Summer fey can survive.

With the (unwelcome) company of his archrival, Summer Court prankster Puck, and the infuriating cait sith Grimalkin, Ash begins a journey he is bound to see through to its end— a quest to find a way to honor his solemn vow to stand by Meghan’s side.

To survive in the Iron realm, Ash must have a soul and a mortal body. But the tests he must face to earn these things are impossible. At least, no one has ever passed to tell the tale.

And then Ash learns something that changes everything. A truth that turns reality upside down, challenges his darkest beliefs and shows him that, sometimes, it takes more than courage to make the ultimate sacrifice.

Ash is kind enough to introduce himself to us:

"My name---my True Name---is Ashallayn'darkmyr Tallyn. I am the last remaining son of Mab, Queen of the Unseelie Court. And I am dead to her. My fall began, as many stories do, with a girl..."

Ash gave up everything for Meghan...and lost it all when hse became the Iron Queen. To get it all back, Ash will travel to the End of the World in order to gain a soul.

Joining him in his quest is the mischievious Puck, the grumbling Grimalkin, and the totally unexpected Big Bad Wolf and thought-to-be-dead Ariella.

This is a classic star-crossed lovers story. In order to save Ash's life, Meghan---using his True Name---commands Ash to leave the Iron Realm and never come back. Ash vowed to find a way back to her side, and that's where the story of The Iron Knight comes in. The Iron Knight is Ash's journey to the End of the World, his trials, his tribulations---all to gain a soul so he can enter the Iron Realm unharmed, and ultimately be with Meghan again.

Since this is Ash's story I'm sure you know it takes place from his POV. We get a really good look into Ash's mind, his past. We see what he's able to hide so well under that Winter Prince mask.

And for those who have read the other books in the Iron Fey series---which are from Meghan's POV---where we wonder what could possibly be going on inside Ash's head---this book is a miracle.

There are a number of settings along Ash's journey: from the wyldwood to the Deep Wyld; the River of Dreams to the village of Phaed; the Testing Grounds to, finally, the End of the World.

This is where Ash is tested to see if he's worthy of a soul. He learns all the things it means to be human: weakness of the flesh, conscience, and mortality. And with this knowledge he has to choose whether or not he truly wants a soul. Does he want to remain an immortal, soulless fey or become a weak, mortal human? But if he chooses to become human, there is a price.

I loved being able to see things from Ash's point of view. It was really cool seeing his memories of the past, his feelings toward Meghan, Puck, and Ariella. The visions of the future---what Ash would become if he didn't gain a soul, his possible future with Meghan. It was just a great experience being in Ash's head. Though the parting with Puck was kind of sad, since he can't go into the Iron Realm, the ending (or beginning) for Ash and Meghan was a happy tear-jerker.

"Knight. Do not discount the gift you have been givven. The soul of a Winter fey resides within you. You are no longer part of Faery, but neither are you completely mortal. You are...unique. We shall have to see where it takes you."


"I have come from the End of the World. From the River of Dreams, through the gauntlet and the Briars and the Deep Wyld, in order to stand before you today. I have but one request---to take my place at you side. To resume my duty as your knight, and to protect you and your kingdom for as long as I draw breath. I am still yours, my queen. If you'll have me." 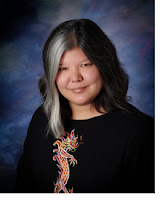 Julie Kagawa was born in Sacramento, California. But nothing exciting really happened to her there. So, at the age of nine she and her family moved to Hawaii, which she soon discovered was inhabited by large carnivorous insects, colonies of house geckos, and frequent hurricanes. She spent much of her time in the ocean, when she wasn’t getting chased out of it by reef sharks, jellyfish, and the odd eel.

When not swimming for her life, Julie immersed herself in books, often to the chagrin of her schoolteachers, who would find she hid novels behind her Math textbooks during class. Her love of reading led her to pen some very dark and gruesome stories, complete with colored illustrations, to shock her hapless teachers. The gory tales faded with time, but the passion for writing remained, long after she graduated and was supposed to get a real job.

To pay the rent, Julie worked in different bookstores over the years, but discovered the managers frowned upon her reading the books she was supposed to be shelving. So she turned to her other passion: training animals. She worked as a professional dogtrainer for several years, dodging Chihuahua bites and overly enthusiastic Labradors, until her first book sold and she stopped training to write full-time.

Julie now lives in Louisville, Kentucky, where the frequency of shark attacks are at an all time low. She lives with her husband, two obnoxious cats, one Australian Shepherd who is too smart for his own good, and the latest addition, a hyper-active Papillon puppy.
Posted by Christina @ Biblio Thoughts at 10:57 AM