The planet is on the brink of destruction and Haru must finally face the evil Lucia once and for all.   Haru’s only hope is to enter Endless and fight Lucia on his own turf, but even Haru can’t destroy Endless on his own.  Only Elie’s Etherion is powerful enough to stop Endless and save the planet.  Haru is perfectly willing to sacrifice his own life in order to conquer the forces of evil, but Elie refuses to unleash Etherion until Haru is out of harm’s way.  The future of all humanity hangs in the balance and time is running out.  Will Elie launch Etherion in time to save the human race?  Find out in the final volume of Rave Master!

Since this series has so many characters, for this review I'm only going to go into the three characters most important in this omnibus: Haru Glory, Elie, and Lucia Raregroove.

50 years ago, Elie was known as the famous dancer, Resha Valentine. Resha was loved by everyone in the kingdom of Symphonia and it's surrounding villages. After a prophecy foretelling the events now happening, told to the King by Master Saga, Resha and the King faked her death so that her Etherion power can be used in the future to stop Endless. Having traveled to the future caused Resha to lose her memory, and she then became Elie. After Elie regains her memories as Resha, she becomes all the more determined to use Etherion to remake Rave and stop Endless.

Lucia is the last Raregroove, the family that was always at odds with the Symphonian royal family, the Glorys. Having seen his mother murdered right in front of him, and then being imprisoned at a young age, has made Lucia a little unstable. Lucia feels it's his responsibility to use Endless to destroy the parallel world and it's crime against time.

The theme of Volume 33 is overall belief in someone and the willingness to fight for them. Haru may be the Rave Master, but it's not because he's the Rave Master that people believe in him. It's because of who he is as a person. He can make the greatest of enemies into life-long friends. He inspires hope in those who have otherwise lost it. And he loves the world and those in it more than anyone, and will do anything to protect it all. Those qualities are what make those around him believe in him and want to fight for him. Everyone does what they can to clear a path for Haru to reach Lucia. Especially Julia, Belnika, Niebel, Let and Musica. They fight two of the Four Demons so Haru can keep moving toward Lucia.

In Volume 34, the theme is overcoming one's own limitations and finding the strength to keep fighting. Let, Haru, and Shuda all reach a point in their respective battles where they feel like they can't continue fighting. Each finds motivation to continue fighting from different sources, whether to their own self-hurt or not. Let finds strength when he chooses to abandon his humanity to transform into the Dragon; Haru finds the strength to stand back up after remembering something his father, Gale, once told him; and Shuda finds strength from his determination to surpass Gale and his promise to protect Haru. Each finds the strength to overcome their limitations and continue fighting from different places, but the important thing is that they continued to fight no matter the cost.

And finally, the theme of Volume 35, as well as the overall theme of the omnibus, is self-sacrifice. I believe that in the final volume, Haru and Elie are the ones who sacrifice the most. Haru, his life; and Elie, her heart. Haru, as I said before, loves the world and it's people so much he risks his life everyday to protect it, even more so in the final battle with Lucia. Elie is more reluctant to use Etherion to stop Endless when things take a turn for the worse, but knows that she must, even at the cost of breaking her heart and losing her memory again.

The main element, I'd have to say, of this omnibus is emotion. We see so much emotion, not only in the words, but in the art as well. That's one of the things I like most about manga. With novels we can only imagine how things are happening, but in manga we can actually see it. I think that being able to visually see the actions and emotions of the characters makes it feel more real. But I think that the emotional element benefits most from the art. Actions are easy to imagine and visualize in your head, but emotion is a little harder. There is so much depth and substance to emotion that it's hard to really comprehend unless you've felt that way before. But the manga-ka's art really brings it all to life. So much so, that sometimes I find myself feeling what the characters feel.

These final three volumes are the start and finish of the final epic battle to save the world. And epic it is. Each battle is a stepping stone to the end where Lucia and Endless wait. As each battle starts and finishes we see belief, determination, friendship, self-sacrifice, and finally love. Each of these combine to make an emotional and explosive final battle. And the final result is a bitter-sweet one.

The Stellar Memory is a place that can rewrite history. It holds the memory of the world, or to be more specific, time itself. Past, present, and future. It's what created the parallel world, by the hand of the last survivor of the original world. And that crime against time is what also created Endless. When Haru realizes that the black sphere they're all fighting in is really the Stellar Memory, he's surprised, but is soon relieved to know that he finally made it there and that they can definitely defeat Endless.

I can't say too much about Endless, where Haru's final battle with Lucia takes place, but I will say that Endless was created to destroy the parallel world and restore history to it's original timeline. Endless grows by accumulating humanity's hate and ambition. It's the most powerful Dark Bring, the Dimension-Destroying Dark Bring, Endless. So I'm sure you can see why the Rave Master and the Etherion-user must destroy Endless at all cost.

I love manga that have final epic battles. And it was definitely epic. A also like series that have a long running like this one with 35 volumes. The art gets better as the manga-ka draws and draws. This series couldn't have had a better ending. I absolutely loved it!

"You fight for amusement all you want! I'm fighting for Haru! What you're fighting for matters! It matters and I'm gonna prove it!"

"You must believe in your own strength. And set yourself free from your own limitations. I know you can do it. You are my son, after all..."

"Humanity has been manipulating time and space to create this lie of a world! In God's eyes, that was the ultimate blasphemy!"

"I fight, because I choose to fight! Because I love this world! There are some things worth dying for, Lucia."

"Why do we exist? Are we here to love...or to hate, to create...or to destroy, or is it all completely meaningless...? Maybe 'life' is just the time we kill while waiting for 'death'." 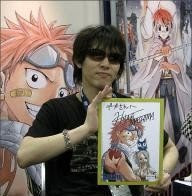 
Hiro Mashima is a Japanese manga artist most known for his fantasy manga Groove Adventure Rave, published by Kodansha's Weekly Shonen Magazine, from 1999 to 2005. The series was later adapted into an anime. However, the anime adaption was cancelled before it could complete the series.
Posted by Christina @ Biblio Thoughts at 4:49 PM