Review: Blood of the Wicked by Karina Cooper


Tagline(s): Can love exist in a world that is truly hell on earth?

When the world went straight to hell, humanity needed a scapegoat to judge, to blame . . . to burn.

As an independent witch living off the grid, Jessie Leigh has spent her life running, trying to blend in among the faceless drudges in the rebuilt city. She thought she was finally safe, but now she's been found in a New Seattle strip club—by a hard-eyed man on a mission to destroy her kind.

A soldier of the Holy Order, Silas Smith believes in the cause: trawling the fringes of society for the murderous witches who threaten what's left of the world. Forced into a twisting web of half-truths and lies, he has to stay close to the most sensuous and electrifying woman he has ever seen and manipulate her into leading him to the witch he has to kill: her brother. Silas doesn't know that Jessie's his enemy, only that he wants her, needs her, even as he lies to her . . . and must protect her until his final breath.

After her mother's murder, Jessica Leigh spent her life on the run, raising her younger brother, Caleb, hiding and learning how to lie. And she has become very good at it. With the possibility of being caught by the witch hunters, she's become wary and mistrusting of those around her. Though, when she meets Silas, even as she knows nothing will change and it will only end in heartbreak, she begins to trust and care for him.

As a missionary of the Holy Order, Silas Smith believes in the cause and his duty to rid the world of witches. And he has seen some of the most monsterous acts done for their rituals. These acts help fuel his belief and desire to fulfill his duty. When he meets Jessica in his mission to find and kill her brother, Caleb, he doesn't know that she's a witch, as well. But he begins to trust and care for her. And when he finally finds out that she's a witch, too, he needs to decided between his duty to the Holy Order and his love for Jessica.

Caleb Leigh is a soothsayer, someone who sees visions of the future, whereas his sister is a seer of the present. When he sees a vision of Jessica's death, he decides to leave her and tells her not to look for him. He joins a coven hoping to eventually bring it down, but in the process has murdered many to gain the power he needs to do so. These acts bring him to the attention of the missionaries of the Holy Order.

Can love exist in a world that is truly hell on earth?

Blood of the Wicked has the theme of love lasting in a seemingly impossible situation. It's been used in many classic tales , as well as newer stories, so we're quite familiar with it. In Blood of the Wicked, we have the impossible situation of a witch hunter, bound by belief and duty, falling in love with a witch, the sister of the witch he's on a mission to kill, in a world that wants to destroy them both. They both have enemies on both sides closing in on them. What will ultimately decide the outcome is the hunter's choice between his duty and the woman he loves. Will he kill her or save her life?

The world of this book, as well as some of it's inhabitants, is shrouded in mystery. There's about five paragraphs that tell us a little about the world of the story. A number of disasters ravaged the planet, bringing about destruction. Before the quake that devoured Seattle, witches weren't completely accepted, but they didn't have to hide, either. But once the Holy Order took charge to bring the world to order, with the aid of the government and the Mission, the witch hunts began. What caused the destruction? What exactly is the Holy Order? We know that the Mission was once an extremist terrorist group before the quake, but what was their mission and why did they join with the Holy Order?

Even some of the characters have the shadow of mystery over them. One in particular is our main male character, Silas Smith. We learn a little about his past when he tells Jessie about his first mission, and in an off-hand comment that he never knew his mother, but that's about it. What I really want to know is how he injured his knee.

The main plot is told from the alternating perspectives of Jessica Leigh and Silas Smith as they try to locate Caleb Leigh and survive enemy attacks. But there is a small sub-plot narrated from Caleb's point of view. We see his interactions with the Coven of Unbinding, and his own secret strivings for more power. Whether his want for power is really as unselfish as he claims is up to interpretation. Eventually, the main plot and the sub-plot merge toward the end.


There are two main settings in this story. There is New Seattle, which Jessica describes the structure as being built like a "layer cake." And then there's Old Seattle, which is the ruins of Seattle before the quake, a mass tomb for those who never made it out.

Old Seattle is located deep within the trench created when the San Andreas Fault split and swallowed the city. It's a mass tomb for the two million plus who couldn't make it out of the city. It's dangerous and unstable and avoided, unless you have a death wish. But what Jessie finds there makes her feel an indescribable joy. In the forgotten city that should have abandoned all hope, the earth is reclaiming. Moss and roots are overtaking and bringing the city life again.

There is a sub-setting that takes place at Matilda's home. It's a secret sanctuary that only Matilda knows that way to. The only thing we know about the location is that it's in the trench somewhere. The sanctuary is a beautiful place with hot springs and flowers not seen in New Seattle. A truly mysterious and awe-inspiring place that is a true oasis for those Matilda allows entry. There's only one rule in Matilda's home: lies are not tolerated. And you are to never reveal it's existence to anyone.

I gave this book a 4 out of 5 because I truly loved it. I like stories where love is tested. Sometimes it works out and sometimes it doesn't. Add to that the supernatural element of witches, the historical element of the witch hunts, and a dash of dystopian rule, and you've got a really entertaining story.

"Nothing in this world is black and white. One is merely the absence of color, which is boring, staid  and without life. It is stagnancy. The other is every color, which is chaotic. Untrustworthy, unpredictable, and unstable. Neither will bear life."


About this Author
:
Born from the genetic mash-up of lesser royalty, storytellers, wanderers and dreamers, Karina Cooper couldn't help but be a writer. After writing happily ever afters for all of her friends, she eventually grew up (kind of) and fell in love with paranormal romance. Because, really, who doesn't love hot men and a happy ending?

When she isn't writing about murder and mayhem, Karina designs Steampunk and neo-Victorian couture for gentlemen hobbyists and ladies of questionable reputation. She lives in the beautiful Pacific Northwest with a husband, four cats, one rabbit, the fantasy of a dog and a passel of adopted gamer geeks. She adores hearing from readers, so grab a cup of tea and visit http://www.karinacooper.com, or follow her ...more 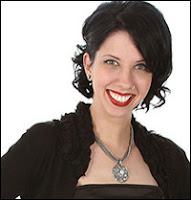 Born from the genetic mash-up of lesser royalty, storytellers, wanderers and dreamers, Karina Cooper couldn't help but be a writer. After writing happily ever afters for all of her friends, she eventually grew up (kind of) and fell in love with paranormal romance. Because, really, who doesn't love hot men and a happy ending?

When she isn't writing about murder and mayhem, Karina designs Steampunk and neo-Victorian couture for gentlemen hobbyists and ladies of questionable reputation. She lives in the beautiful Pacific Northwest with a husband, four cats, one rabbit, the fantasy of a dog and a passel of adopted gamer geeks. She adores hearing from readers, so grab a cup of tea and visit http://www.karinacooper.com, or follow her on Twitter via @karinacooper
Posted by Christina @ Biblio Thoughts at 2:11 PM